Most birds migrate on a regular basis and more or less follow a regular route. However, a number of species which inhabit and spend most of their lives in the tundra or boreal forest in North America irrupt out of their normal wintering grounds every few years. Incidentally, as Scott Weidensaul explains in Living on the Wind, “this is not a misspelling.  The departure of the birds from their normal range is an eruption, but their arrival somewhere else is the reverse — an irruption, a bursting in.” 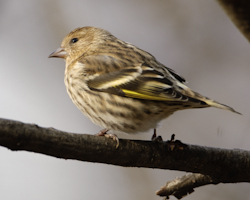 As I write this article in late November, it looks like this is going to be an irruption year.  Many of us are already seeing at our feeders larger numbers of Red-breasted Nuthatches, Pine Siskins, and Purple Finches than normal, along with an occasional Black-capped Chickadee, a very rare visitor to northern Virginia (our Carolina Chickadees are year-round residents).  And, there have even been one or two reports of Evening Grosbeaks.

There are two basic groups of irruptive migrants to the northern U.S. — seed and tree-fruit eaters and predatory birds — which occasionally dip this far south.  We discover the first group, boreal finches and other songbirds, when they show up at our feeders.  The second group depends on cyclically fluctuating rodent populations.

While some of the predatory hawks and owls are very secretive, some are not because they may never have seen a person before.  Because of their lack of contact with humankind, these predators have little or no fear of people.  Some, such as the Snowy Owl, will hunt in open areas during the day where they can be easily watched.

Birds in neither group leave their normal wintering grounds because it is going to be a bad winter but leave because they cannot find enough food.   The seed and fruit crops the boreal finches depend on fluctuate from year to year.  When their food crops drop to a low level, they move hundreds or even thousands of miles to another area.  Some seeds crops are cyclical in nature, and the irruptions that coincide with them can often be predicted.  Others vary according to weather conditions and are difficult to predict.

While many people think of migration as a north-south or south-north phenomenon, irruptive species are nomadic with their movements linked to food supplies.  Their migration can as likely be east or west.  As a result the details of these nomadic movements vary from species to species and from year to year.

In some cases they involve nearly all the immature birds leaving the poorest territories, while in other cases virtually the entire population of a species may move.  If they did not move they would suffer very high mortality rates.  This may still occur if their travels bring them to areas which also lack sufficient food sources.

Crossbills, which rarely show up in our area, are an excellent example of a highly nomadic species as they are dependent on cone crops in their native boreal forests.  Christopher Leahy writes that cone crops “vary according to irregular tree growth cycles tied to such climatic factors as rainfall and temperature,” and that crossbills move to where they can find a healthy cone crop.  And according to the Vermont Center for EcoStudies, nomadic species rarely return to the same breeding area in successive years in contrast to most other bird species. 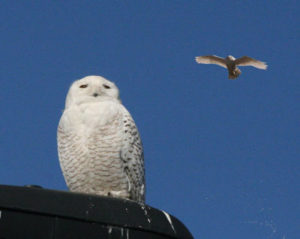 Not surprisingly, irruptions often occur after the prey base or seed crops have been especially large, and the birds that depend on them have been highly successful during nesting.  Scott Weidensaul, in his book Mountains of the Heart, points out that while Snowy Owls “are not migratory in the normal sense … their food supply ― lemmings and voles, mostly ―suffers a cyclical population collapse.

When that occurs, the owls with the poorest territories, generally the youngest, must leave to find food.  Some wander south as far as our area (remember the Snowy Owl that spent the winter of 2005 at Dulles Airport).  Others that only leave home when their food supply is low are Northern Goshawks, Boreal Owls, Great Gray Owls, and Northern Hawk Owls.  A few winters ago a large number of the latter three appeared in northern Minnesota, and birders from all over the country flocked to the area around Duluth.

While Snowy Owls are easy to see because they hunt in the daytime and show little fear of people, Northern Saw-whet Owls, a tiny owl that weighs only 2.8 oz. and stands 8” high, are highly secretive.  They show up in our area during migration, but their numbers vary considerably from year to year.

The large number captured and banded at banding stations this fall confirms 2007 is an irruption year.  Interestingly, Ron Pittaway, a field ornithologist in Ontario, predicted in mid-September that “there will be a strong flight of Northern Saw-whet Owls this fall” since deer mice were declining rapidly in central Ontario due to poor seed crops this summer.  When deer mice decline, red-backed voles, a forest vole, also decline.  Red-backed voles are a favorite food of Northern Saw-whet Owls.

I don’t know about you, but I’m going to listen carefully for the call of a Northern Saw-whet Owl and also look for Snowy Owls hunting in Loudoun’s fields.  Of course, as a result of this year’s drought, it is likely that our seed crops are in short supply and our small mammal populations have also crashed.  If this is the case, we can expect that these northern visitors will move on to greener pastures.

For more information on irruptions, please refer to the sources used to compile this article:

Living on the Wind; Across the Hemisphere with Migratory Birds by Scott Weidensaul, North Point Press, 1999.

Mountains of the Heart: A Natural History of the Appalachians by Scott Weidensaul, Fulcrum Publishing, 1994.