As winter takes its icy grasp of a stream, organisms have some choices. They can leave behind dormant eggs or seeds to carry on their legacies before they succumb to the cold, or they may become dormant themselves in hibernation. Frogs such as the wood frog freeze almost solid. In the fall they take refuge in inches of mud or under logs or other debris. As the temperature drops, the frog’s liver converts its blood to glucose. This does not freeze like water and provides protection for the frog’s cells. And since most free-flowing streams will not freeze completely (the water remains at around 4° C), another option is to continue alive and active throughout the winter.

Organisms in the water have certain adaptations in their physiology or behaviors that allow them to survive the cold. Many animals decrease activity; their metabolism and other bodily functions slow down to conserve energy. Fish swim to the bottom, where the water is warmest, to wait until spring. Some, such as the bullhead catfish, can withstand freezing solid and will thaw out with the ice in the springtime. Snapping and painted turtles can be seen moving around under solid ice. Beavers, otters, and muskrats continue activity among the ice and snow. With their thick coats and fat layers, they are well equipped for the cold season. 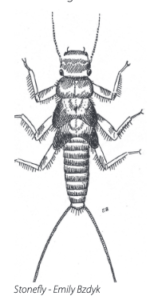 Many insects and other invertebrates hibernate in mud or debris, but some, such as sowbugs and many beetles, remain active. How can these seemingly fragile organisms keep going in such bleak conditions? There are many reasons these organisms are able to survive. For one thing, colder water holds more oxygen. Additionally, in the fall massive amounts of organic matter enter the stream environment as the trees defoliate. Litter decomposition from the leaves provides rich organic matter which stream invertebrates can reside in and subsist on. Some even secrete a kind of antifreeze to preserve their bodies.

The main winter invertebrates that demonstrate life in the winter stream are the winter stoneflies of the families Taeniopterygidae and Capniidae. These insects hatch out of eggs as nymphs and live in the water for most of their lives, like many other aquatic insects. They are small and inhabit the hyporheic zone, which is the area of flow beneath rocks and gravel at the bottom of the stream or river. They remain close to the substrate prior to emergence. This is why they are often not represented in benthic sampling (unless it is conducted in the winter), despite their numeric and ecological importance.

In the coldest part of the winter, the small adults emerge and can be seen walking on the snow. Their bodies are dark to absorb heat. They have one mission: To mate and lay eggs, to pass on their genes. The nymphs hatch soon after the eggs are laid, and then as the weather warms they enter diapause (a hibernation-like state) from mid-spring until fall. Then they awaken to continue their lives in the familiar and comforting cold.