While our Loudoun landscape is beautiful in any season, if you’re like me, you find joy in any plant that looks green and alive during the gray winter months. One of these welcome green shrubs is the American Holly. While not as widespread here in Loudoun as it is in some areas of its very large range, it is still a beautiful part of the winter landscape. 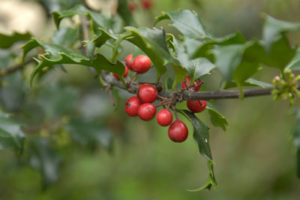 American Holly (Ilex opaca), with its dark green evergreen leaves and bright red berries, is an attractive ornamental landscaping plant. These same attributes make it a sought-after Christmas decoration. As an added bonus, the dense, spiny foliage makes a useful cover for many songbirds, and the berries are eaten by white-tailed deer and squirrels as well as 18 different species of birds.

Birds are largely responsible for its distribution—especially large migrating flocks of songbirds—and it grows from Massachusetts to Florida and west to Texas and Missouri.  It is most successful in low-lying coastal areas of the humid Southeast and thrives in sun and well-drained soils; however, it is an adaptable plant and can tolerate shade and poorly drained soils. It can reach a height of 40 feet in ideal conditions.

The leaves of the American Holly are dark green, shiny, and smooth with large spines. Small greenish-white flowers bloom from April to June, followed by berries that ripen from September to October. These bright red berries persist on the plant into the winter months. All hollies are dioeceous, and berries only form on females if a male of the species is located within 40 feet.

Before laws were passed in Maryland and Delaware protecting American Holly, it suffered from being vandalized and cut on public lands for sale as Christmas decorations.  Until Virginia enacts similar protections, we in Loudoun should give ourselves and our wildlife the benefits of this lovely plant by planting a pair (or more) in our own backyards.

When the Pilgrims landed on the coast of Massachusetts the week before Christmas in1620, they found  that the dark evergreen leaves and red berries of American Holly reminded them of English Holly (Ilex aquifolium), which had been used as a Christmas decoration for centuries before. I would imagine the sight of this familiar cheerful plant must have been a welcome one for the Pilgrims in those cold winter days, and it continues to be a bright spot in the winter landscape for us today.

Now that you’ve read the article, try our Holly Crossword Puzzle for some fun!