The approaching chill in the air brings to mind an array of autumnal images: radiant foliage, crunching fallen leaves, crisp blue skies, and the subtle but distinctive flurry of wildlife preparing for the approaching winter. 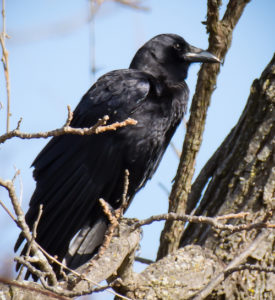 One species in particular presents itself as one of the more iconic faces of fall: the American Crow. The reason for its overwhelming presence during this season lies with its unusual social structure.  American Crows are cooperative breeders. This means that they may stay close to the place where they were born to help raise young and defend the area against predators.

This defense applies to both breeding and nesting territories, even into the winter months. Winter roosting behavior begins in autumn and peaks in mid-winter. Large numbers of crows, from tens to hundreds of thousands, will assemble in the late afternoon hours in an area with large trees.

American Crows (Corvus brachyrhynchos) are completely black, including the head and feet. The feathers are glossed with a purplish tint. Fairly large in stature, they stand 43–53 cm and have a relatively diverse habitat, occupying woodlands, farmland, agricultural fields, river groves, and shores. This species prefers open areas with nearby trees, and agricultural areas are ideal for foraging.

Incredibly versatile, the American Crow even flourishes in urban and residential settings. Being omnivores, this species will eat virtually anything. The diet consists of anything from worms to insects to nuts and berries. Additionally, they hunt small mammals and birds. The American Crow can be distinguished from their closest look-alike, the raven, most easily by size (ravens are much larger), by voice (ravens are hoarser), by the bill (ravens have heavier bills), and by the shape of the wings and tail (which come to a point in ravens but not crows).

Overall, the American Crow does not serve any special purpose in the greater ecosystem.  However, they do help with seed dispersal by caching nuts and eating fruit. Furthermore, because they feed on carrion, they assist with the disposal of dead animals. People often consider these birds a nuisance, due to noise, crop destruction, mess, and disease from feces. Realistically, the American Crow prevents just as much damage by eating harmful insects.  These fascinating birds are intelligent and fun to watch in their day-to-day activities.