Wildlife Encounters: Bears in the Backyard, Snakes in the Basement

Coexisting with Bears and Snakes 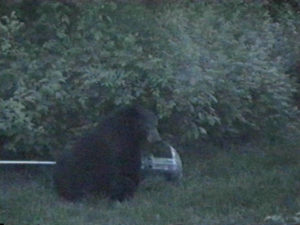 As the county’s human population grows and spreads over the space, people often find themselves face to face with the original inhabitants. Reports have come in of a mountain lion in the western hills, and bears seem to crop up everywhere. Bears are usually seen in the spring and early summer, when young males, like other males of a certain species, refuse to ask directions and wind up in the wrong neighborhood. These are not grizzlies, but the good ol’ American black bear, a relatively benign creature unless you have him cornered or leave your apiaries unprotected. There have also been reports of bears entering stables to feast on the aromatic pleasures of sweet feed. Try containing the odor with metal garbage cans, which will discourage rodents and raccoons too.

If you see a bear, and it is not in your kitchen or other inconvenient location, grab a camera (but keep your distance) instead of calling 911. Law enforcement authorities can only respond with massive shows of force, which may look good to the neighbors, but this only terrifies and possibly corners the bear, forcing an otherwise unnecessary confrontation. Black bears are not searching for snacks of kids playing on streets. Make sure it has an escape route, then show him or her your displeasure at having your territory invaded by banging pot lids, waving and yelling, or squirting with a hose.  One family removed a bear from the back porch by cracking the sliding door and aiming a radio out through it, tuned to a rock station at full blast, but some might consider this unnecessarily cruel. Whatever steps you take, don’t appear to threaten the cubs if mom is around. Keep your family and pets inside and give the confused animal a chance to leave.

Bears are traditional residents of the Blue Ridge and Piedmont river basins, and we should have the largeness of spirit to share the place with them. Two-legged predators are much more dangerous.

If you truly have a nuisance bear situation and have sustained frequent damage, Call the Virginia Department of Game and Inland Fisheries to ask the help of their bear biologists; their main number is 804-367-1000 or email them at dgifweb@dgif.virginia.gov. 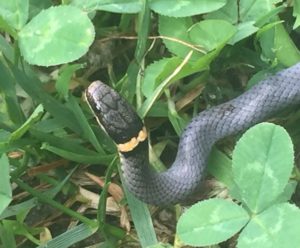 Other visitors you might not want include snakes. They sometimes take up residence for the winter in crawl spaces under houses, particularly those with stone foundations. These are primarily blacksnakes, harmless and beneficial rodent catchers. When we lived in an old log home years ago, we had an enormous blacksnake who liked to curl up on top of the water heater in the cellar as the nights became cooler. The only one who objected was the plumber, who discovered the shed skin when attempting to fix frozen pipes. The first year I lived in the county, I killed a blacksnake that was exploring my screened porch. I was plagued with mice all spring.

If you cannot live with the thought of reptiles sharing the secret recesses of your home, try placing tubes of window screening, wide enough for the snake to pass through, in any visible holes in your foundation. They should be long enough to almost, but not quite, touch the ground. These are one-way doors. The snake will leave at night to forage, and find a floppy contraption blocking his re-entry. Please don’t do this if we are anticipating a severe drop in temperature, as the snake may not have time to find another resting place before freezing to death.

Chimney caps will discourage them from dropping into your fireplace, an unnerving situation even if you like reptiles.