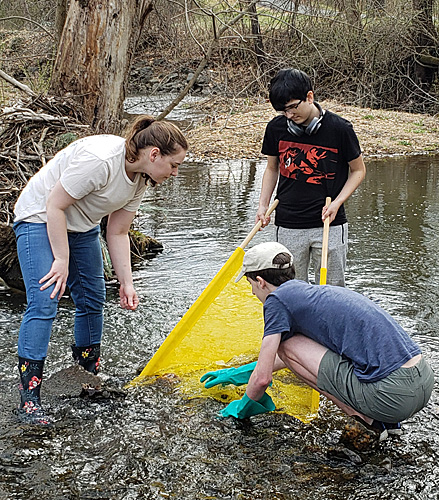 On Saturday March 19, four volunteers joined certified stream monitor Emily Maltman to conduct a benthic macroinvertebrate survey on Tuscarora Creek at Olde Izaak Walton Park. The weather was perfect for the spring survey, even coaxing Red-bellied Woodpeckers and a Belted Kingfisher out to soak up the sun and delight volunteers with their calls!

Although crayfish were present in last fall’s survey, they were not collected in this survey or even seen in the area. Crayfish are known to be a keystone species because their presence greatly benefits the health and stability of the ecosystem in which they live.

The stream received a health score rating of 8 out of 12, indicating that ecological conditions could not be determined at this time. This is a decrease from last year’s fall survey, in which the stream received a score of 9, indicating acceptable conditions. More data is needed to determine what factors could be contributing to the stream’s health decline, but one suspected pollutant is road salt. 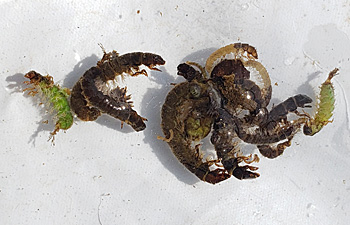 A collection of pollution-tolerant netspinning caddisflies.
Photo by Callie McCormick

In addition to conducting benthic macroinvertebrate surveys twice a year, Loudoun Wildlife Stream Team volunteers have also been assessing monthly and winter sodium chloride levels at this stream site to start a long-term study of the relationship between road salt use and stream health. Sodium chloride levels at this site over this past winter reached 382 ppm – well over the EPA toxicity threshold of 230 ppm.

Road salt is used to melt ice during winter snowfall and eventually runs off into the surrounding soil. Spring rains can flush the remaining salt into local streams and rivers, increasing the salinity of our waterways and can even end up in our drinking water as water treatment plants may not be equipped to remove the extra sodium. Salt that isn’t washed away can remain in the soil for decades, slowly leeching into streams and creating an uninhabitable environment for freshwater fish and macroinvertebrates.