The Amphibians of JK Black Oak

Amphibians, consisting in our area of frogs, toads, salamanders, and newts, are an extremely important part of the ecosystem. They are a food source to a broad range of animals including other amphibians, reptiles, birds, small mammals, and larger mammals. In addition to being an integral part of the food chain, they are also an important indicator of the health of a local ecosystem. The skin of an amphibian is permeable to water and oxygen, and also contains many glands that produce mucous to keep the skin moist. Due to the permeable nature of their skin, amphibians can absorb toxins from the air and water. Monitoring their populations is vital to monitoring the health of an environment and the stability of the amphibian populations. 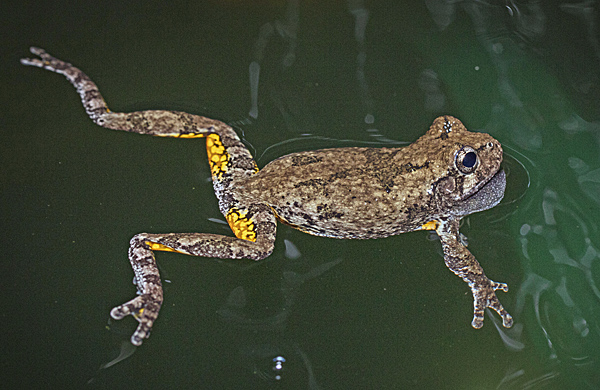 Vernal pools are an extremely important but often overlooked part of our ecosystem, often completely unnoticed until the winter rains and thawing snow begin to fill these natural depressions in the forest floor. Vernal pools are temporary pools that do not contain any fish and dry up as the weather warms and the amount of rain decreases. These are crucial habitats for our local amphibians. As we are losing our forested areas, we are also losing these vernal pools, which leads to declines in local amphibian populations. Because our amphibians are in a national (and worldwide) decline, it is important that we monitor changes in the populations so we can proactively help protect the ecosystems they need to survive.

The vernal pools at the JK Black Oak Wildlife Sanctuary offer our local amphibians an optimal habitat for breeding, and a haven for them as they develop into adulthood. In March 2021, Loudoun Wildlife Conservancy started the first year of a continuing population survey of the amphibians living and breeding in and around the vernal pools of JK Black Oak. This ongoing survey will allow us to monitor the amphibians and track fluctuations in the numbers of amphibians.

JK Black Oak contains 13 vernal pools on the property. Approximately half of the vernal pools dried up fairly quickly due to the lack of rain in the early spring. Since they dried up so early in the season, they were not able to support breeding and developing amphibians. Most of the pools that dried up were also lacking tree cover, which made them more susceptible to early drying. Loudoun Wildlife Conservancy Habitat Restoration volunteers are working diligently to rebuild those areas that lack the needed tree cover. The remaining vernal pools proved to be quite productive, retaining water for a long enough period to support developing amphibian life, plus a surprise or two as well.

These species were observed at JK Black Oak after the first year of monitoring the populations: 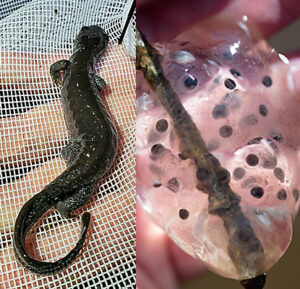 Our most exciting surprise this past year was a healthy breeding population of Jefferson Salamanders. These salamanders are approximately 5-7 inches in length and are a light-dark gray with light colored flecks on the sides. Jefferson Salamander adults were observed in four of the vernal pools, and we recorded 47 egg masses in these four pools. The Jefferson Salamander has a Virginia Wildlife Action Plan Rating of Tier IV, which means that the species may be rare, especially on the periphery of their range. Populations have demonstrated a significant decline, and long-term planning is required to stabilize or increase populations. 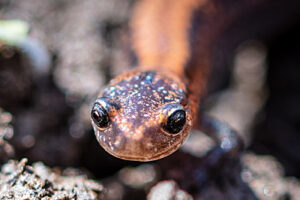 This little salamander was not one who utilized the vernal pools to lay eggs because, unlike many other amphibian species, they do not have an aquatic larval stage. The eggs are laid in dark, damp areas such as under rocks or rotting logs (which is where this one was found). They are fairly common in a damp woodland area. 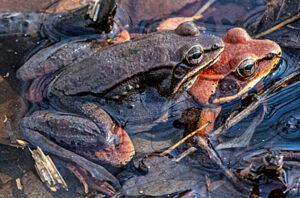 One of the earliest amphibians to emerge and begin breeding in the vernal pools is the Wood Frog. The Wood Frog, which often has a dark eye mask over each eye, has the distinction of being found well into the Arctic region. They hibernate over winter in a frozen state under a light layer of leaf litter. They have a natural “anti-freeze” that enables them to survive very cold temperatures and allows them to be the first to emerge in the late winter in many areas. 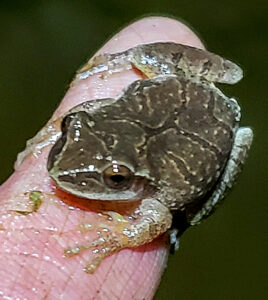 As their name indicates, these small frogs start their breeding call in the early spring. Though they are only around an inch long, their calls can be quite loud. After breeding is complete, they return to the trees, where they rarely climb higher than three feet.

This little tree frog, approximately 2 inches in length, can alter its skin color based on the surrounding conditions. Gray Treefrogs are quite elusive and can be challenging to locate until the beginning of breeding season (which can be lengthy, depending upon local weather conditions). The Gray Treefrogs migrate from the trees to the water at night for potential breeding and return to the trees in the late night, usually around 11:00 pm–1:00 am.

The Green Frog is one of our larger frogs, 3-4 inches in length, and is often mistaken for a bullfrog. Although a Green Frog and a young bullfrog can be very similar in appearance, the Green Frog has dorsolateral ridges (ridges on either side of the back that run down the length of the body) and a more pointed snout than the bullfrog. The Green Frog lives in and around water and gives a call that sounds like a banjo string.

The American Toad is one of the two true toads that we have in our area, the other being the Fowler’s Toad. (There is also the Eastern Spadefoot (Scaphiopus holbrookii), which is a primitive frog though it is often referred to as a toad.) The American Toad is a common resident in our area and, much like our other amphibians is around water only during breeding season. They lay eggs in long strands attached to vegetation, and the eggs can hatch relatively quickly.

Though we did not observe any breeding activity with the Pickerel Frog, it was very exciting to see this often elusive, medium-sized frog during one of our Amphibian Night walks at JK Black Oak. 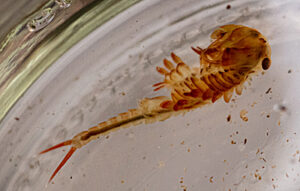 These obviously are not amphibians, but we observed a healthy population of Fairy Shrimp in the majority of the vernal pools. What are Fairy Shrimp? They are related to the brine shrimp (probably most familiar as the “Sea Monkeys” we bought as children) only they are freshwater shrimp and live in vernal pools. They have a relatively short lifespan, living only for one season, but are prolific breeders whose eggs can lay dormant in the leaf litter of a vernal pool until conditions are right for hatching. They emerge in the winter in our area when the vernal pools fill with water, and are a favorite food source of our visiting Wood Ducks (who transport the Fairy Shrimp to new locations through their feces). Our local Fairy Shrimp are more commonly seen in the late winter through the mid-spring in the vernal pools, but since we experienced an extremely high amount of precipitation in June we also observed a later emergence of them at the end of June/ beginning of July, which was a real treat!

As the Amphibian program grows, so will our programs, which will soon include reptiles as well as amphibians. Please contact Loudoun Wildlife Conservancy for information regarding this and any of our other programs.

Due to the environmentally sensitive habitat and rare species, JK Black Oak is not open for general public access.