Book Review: A World on the Wing by Scott Weidensaul

Bird migration is a miracle, and the more we learn about it, the more miraculous it becomes. That is the central lesson of Scott Weidensaul’s astonishing new book A World on the Wing: The Global Odyssey of Migrating Birds. Weidensaul, a longtime author and citizen-scientist focusing on birds and bird migration, takes us on an around-the-world journey following birds on their annual travels.

Some of the routes birds take are awe-inspiring. Until recently, scientists believed that the Arctic Tern had the longest migration route of any bird, travelling about 25,000 miles a year. But with the help of new tracking technology, it was discovered that Sooty Shearwaters nest in New Zealand and then migrate north along the western edge of the Pacific Ocean to the Arctic, where they spend the northern summer before flying down the western coasts of North and South America and then back to their nesting areas — a round trip totaling 46,000 miles! 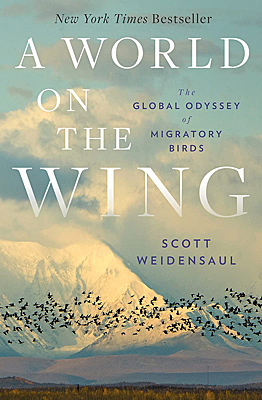 That record didn’t last long. With newly developed tracking devices attached, Arctic Terns reclaimed the top spot. One population of terns travel from summer nesting grounds in Iceland and Greenland down the coast of Europe to West Africa, across the Atlantic to Brazil, then south to Antarctica. Their return trip tracks up the southern African coast, then across the narrowest part of the Atlantic back to Brazil, then up the east coast of the U.S. to their nesting grounds. This round trip — basically a figure-8 on the entire Atlantic Ocean — totals 57,000 miles a year!

To accomplish these long-distance flights, birds undergo some shocking biological changes. As Weidensaul puts it, migrating birds “can grow and jettison their internal organs on an as-needed basis… and enjoy perfect health despite seasonably exhibiting all the signs of morbid obesity, diabetes and looming heart disease.”

It was well-known that many birds, including the Ruby-throated Hummingbird, double their weight, adding layers of fat before beginning long flights. It has now been discovered that birds with longer migration routes undergo even more extreme biological metamorphoses. Bar-tailed Godwits do not eat during much of their long migration, causing their digestive organs to shrivel and stop working, while their wing muscles double in size and their hearts and lungs double their capacity to pump blood and air. This process then reverses itself when they arrive at their destination. When Red Knots are not at their nesting grounds, their reproductive organs shrink to almost nothing, and then regrow a thousand times larger when they are needed.

The driving force behind all these discoveries is technology, especially the miniaturization of tracking hardware. Fifteen years ago I was privileged to witness an ornithologist trap a juvenile Osprey and outfit it with a matchbook-sized, one-ounce (28-gram) transmitter. With the Arctic Tern weighing only a few ounces, and most songbirds less than one ounce, there was no way to track them then except by leg banding, a labor-intensive and hit-or-miss practice. The last decade has seen a revolution in tracking technology. Transmitters called nanotags are now available that weigh only a fraction of a gram and can be used on the smallest birds, and even on large insects like Monarch butterflies. Nanotags broadcast a unique identification code that can be detected by receivers, some portable, some permanent and solar-powered, whenever the bird (or butterfly) comes within range.

Significant contributions to our knowledge of migration have also been made with the eBird online database. I routinely record lists from my bird walks, mostly for my own edification and to alert other birders to what’s around, but I did not understand the contribution my lists make to migration science. As we record our bird walks, each species can be tracked on eBird so scientists can get a full picture of the timing and movement of that species’ migration. This allows scientists to identify critical mid-migration stopping points that might need to be protected and conserved. I’m going to make an effort to record every migratory bird I see from now on.

There’s much more in A World on the Wing, including the need to conserve coastal areas along the routes of long-distance shorebirds, and the threat to migrating birds from hunting. This is an important and informative book, and at the same time a very entertaining read. It should be required reading for everyone who loves birds.