A Red-shouldered Hawk and a Belted Kingfisher serenaded volunteers from Loudoun Wildlife’s Stream Team, who were monitoring a segment of Crooked Run outside of Lincoln earlier this month. This tributary of the North Fork of the Goose Creek has historically received very healthy stream scores during its long history of surveys, and this fall’s score of 11 out of 12 was no different.

Pollution-sensitive mayfly larvae and beetles (including water pennies and riffle beetles) dominated the sample, with a total of 191 out of 247 macros. The team was fascinated to discover two common burrowing mayfly larvae (pictured), which no one had encountered in their surveys before.

Common burrowing mayfly larvae dig U-shaped tunnels in the stream bottom sediment. They have forked and feathered gills over the top of their abdomen, which they move to create a current of water through these tunnels. These water currents supply them with oxygenated water for breathing and detritus for food. They also have distinctive upturned tusks on their mandibles (see closeup), which they use to dig the tunnels in the soft sediment.

As the sun was setting and the team was packing up their equipment, a Red Fox bounded out of the bordering woodlands and ran along the streambank until it disappeared out of sight. 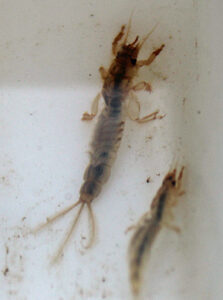 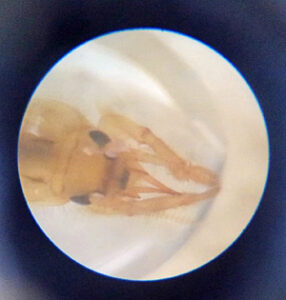 Closeup of a burrowing mayfly and its mandibular tusks.
Photo by Amy Ulland