Birds and Birders Enjoy the Weather at Bles Park 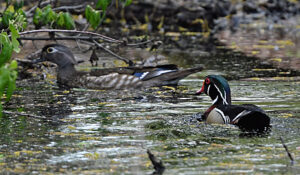 Twenty-eight people joined the monthly walk led by Allison Gallo and Bryan Henson at Bles Park on October 17.  Beautiful fall weather with comfortable temperatures, a light breeze and bright sun made for an enjoyable walk even without the birds.  However, the birds were there, and we found 44 species in our roughly three hour walk. The small marshy area near the soccer fields yielded a group of Red-winged Blackbirds and both Song and Swamp Sparrows.  Ruby-crowned Kinglets and White-throated Sparrows joined us at several locations around the park and were popping up all over. Mallards and Wood Ducks gave us decent looks and we even spotted an American Coot hanging out in the large marsh.  A perched Belted Kingfisher and a close up look at a Red-shouldered Hawk provided some additional beauty by the marsh.  As we left the marshy area, we found a beautiful Blue-headed Vireo. Along Broad Run, we found a flock of birds including a late Northern Parula and a migrating Blackpoll Warbler. As the day warmed up, we found both Black and Turkey Vultures and got a flyby of another Red-shouldered Hawk and an Osprey to cap off the walk.