Philips Farm, a 144-acre tract of land in Waterford preserved by the Waterford Foundation, boasts a 1.5-mile interpretive hiking trail that starts at the Old Mill and follows the bank of the South Fork of the Catoctin. Loudoun Wildlife has partnered with the Waterford Foundation on projects at Phillips Farm including riparian buffer plantings to protect the South Fork from further erosion. We also conduct citizen science programs at the Farm, including our Stream Monitoring Program.

Earlier in October, Certified Stream Monitor Jason Kahn led a group of volunteers in a benthic macroinvertebrate survey of the South Fork just behind the mill. Despite the overcast weather, the small team of volunteers enjoyed netting, sorting, identifying and counting a variety of macros – from a huge hellgrammite (pictured below) to the smallest midge.

After all the calculations were performed, the team was excited to discover that the stream, which received an indeterminate health score of 8 out of 12 last spring, now scored a very healthy 11. An abundance of mayfly larvae (or nymphs), which are highly sensitive to pollution, contributed to this high score. Mayfly nymphs have delicate external gills on their abdomen, which make them vulnerable to sediment and pollutants. The team found one mayfly nymph (pictured) that was in the process of developing wings. 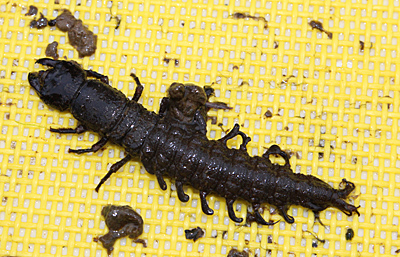 An enormous hellgrammite found in one of the two nettings.
Photo by Amy Ulland