No Matter What You Call Them, Fireflies are Fascinating

Firefly or lightening bug — what do you call the insects that put on a nightly light show during the summer?  Most of the people that attended the July 12 “Who Doesn’t Love Fireflies?” program call them lightening bugs.

Contrary to their common name, fireflies are not flies nor are they true bugs, they are beetles.  Also, there is no fire or lightning involved in the glow these insects display.  Program presenter, Ariel Firebaugh of Blandy Experimental Farm, told us the light produced by fireflies is the result of a chemical reaction that takes place within the insect’s abdomen.  The chemical is luciferase and people use it to detect the presence of bacteria.  Prior to the 1980s, we were not able to produce luciferase in a lab so lightening bugs were the only source. 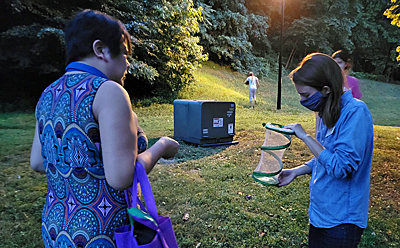 Ariel looks at what was caught.

Other interesting things we learned from Ariel included: