A Visit to Summer Camp

Loudoun Wildlife Conservancy volunteer, Lynn Lothman, visited a summer camp for children with disabilities at Moorefield Station Elementary in Ashburn on July 13. Two groups of 20 children ranging in age from 5 to 18 gathered around to learn more about some of the wildlife that share our habitat in Northern Virginia. 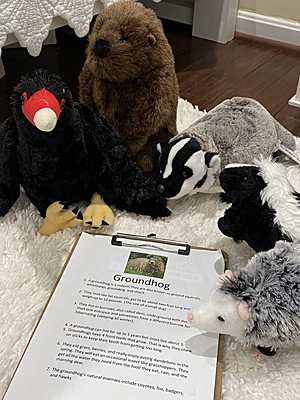 The children enjoyed learning the sign language for the animals we discussed: possum, raccoon, ground hog, skunk and vulture. We read the story “Playing Possum” by Jennifer Black Reinhardt. It’s a story about an opossum that has difficulty making friends with others, and when he feels threatened,  he freezes and plays dead. One day he discovers that the armadillo also curls into a ball when he is afraid; the turtle tucks his head inside his shell; and the skunk sprays something stinky. Once they realized they had something in common, along with a little patience, a lot of understanding and a little forgiveness, making friends became much easier.

The kids then engaged in an art activity and were awarded with Wildlife Ambassador Badges and a promise to speak on behalf of the animals when called upon.

Many thanks to the summer camp supported by PRCS Loudoun County Parks and Recreation and Arts for All for inviting Lynn to share her love of wildlife with some very special little people.