During the afternoon of Sunday, January 28, 24 people in three groups searched the back roads of Loudoun County for birds of prey while on a field trip sponsored by the Loudoun Wildlife Conservancy.

One group was led by Gerco Hoogeweg, Bryan Henson, and Allison Gallo and covered the Lucketts area; another by Phil Daley and Liz Dennison covered the area south of Leesburg and around Lincoln; and the third by Joe Coleman covered the southern part of the county west of Rte 15.

All three groups got great looks at several active Short-eared Owls with seven along Lucketts Rd and perhaps as many as 10 in the vicinity of Foxcroft Rd and St Louis Rd, where a couple were perched high in trees prior to beginning their evening flight. One also interacted with an immature Bald Eagle once they started flying. Another highlight was a Barn Owl seen by one of the groups that had special permission  to go on private property. 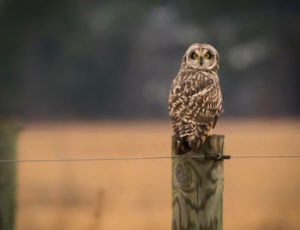 In addition to seeing the Short-eared Owls:

– Joe’s group saw 1 Red-shouldered Hawk, 6 Red-tails, 2 immature Bald Eagles (one interacting with a Short-eared Owl), 2 unidentified hawks, 2 Eastern Meadowlarks in the same field as a couple of the Short-eared Owls, and a Great Blue Heron. Additionally on Tail Race Rd they found, in cut fields of corn, large flocks (over 500 birds in each) of Red-winged Blackbirds, Common Grackles, and European Starlings.