Ten people showed up on a beautiful and crisp (54 degrees when we started) fall morning for the regular (every 4th Saturday) bird walk at the Blue Ridge Center for Environmental Stewardship on September 23. 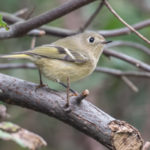 While fog lay heavy in several places it cleared before long and we found a fair amount of migratory activity. As the day warmed up several varieties of butterflies were also seen.  Our highlights included good looks at a Merlin, a Yellow-billed Cuckoo, a Least Flycatcher, a Philadelphia Vireo, four Ruby-crowned Kinglets, two female Orchard Orioles, and several mixed flocks.

While it was tough to ID all the birds in the mixed flocks because of their activity, they included Magnolia Warblers (our most common warbler), most of the Ruby-crowned Kinglets, the Philadelphia Vireo, and the two Black-and-white Warblers. Indigo Buntings, House Wrens, Field Sparrows, and Common Yellowthroats and most of the butterflies turned up in the meadows, managed for wildlife, which were beautiful with goldenrod.  Numerous Cedar Waxwing flocks flew back and forth over our heads with one large flock of Brown-head Cowbirds flying overhead as we were checking out the Monarch waystation at the end of the walk. 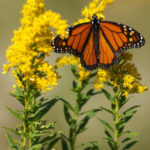 Orchard Oriole  2     Were seen in the distance high in a tree interacting with a Red-bellied WP allowing us to compare the size which was a little smaller than the Red-bellied. Both were obviously yellow on the body & throat  from a distance with somewhat darker wings. Posture and bill was oriole-like rather than like a tanager.

View this checklist online at http://ebird.org/ebird/view/checklist/S39349740