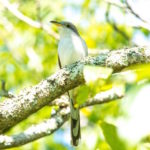 Ten of us showed up on a beautiful morning for the regular (every 2nd Saturday) bird walk at the Banshee Reeks Nature Preserve on September 9. We enjoyed a couple of mixed flocks of migrants as well as great views of Yellow-billed Cuckoos (one of which perched and posed for numerous photos), a Green Heron with feet so bright orange we were able to relocate him when he tucked himself into some very dense foliage, a number of migrating Ruby-throated Hummingbirds, along with great views of Black-and-White Warblers, Tennessee Warblers, a Magnolia Warbler, and Black-throated Green Warblers. Cedar Waxwings were also moving back and forth. Surprisingly, there were no birds of prey.

For a complete list of the birds observed at Banshee Reeks see the eBird report, submitted by Jane Yocom, below. 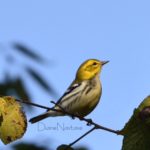 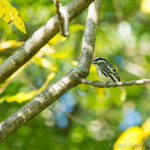