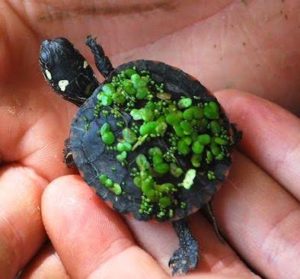 Painted turtles (Chrysemys picta) are the most widely-distributed native turtles in North America with a range that encompasses Atlantic to Pacific and southern Canada to the Gulf of Mexico. The species is, in fact, comprised of several sub-species with distinct traits, and sometimes overlapping geographic ranges. In northern Virginia, you are most likely to encounter the Eastern painted turtle (Chrysemys picta picta), but there is overlap in range with the Midland subspecies (Chrysemys picta marginata) west and north of Virginia in Ohio, Maryland, and Pennsylvania. Both the Eastern and Midland painted turtle are similar in appearance: they are smaller in size , on average measuring 4.5 – 6 inches in length, and have distinctive yellow and red markings on the neck, legs, and sometimes the edge of the carapace which is the upper shell. The bottom of the shell called the plastron is yellow and unhinged.

Painted turtles live in slow-moving bodies of fresh or brackish water including ponds, marshes, swamps, and streams and are easiest to spot when they are basking on rocks, logs, or banks. They are omnivorous and feed on aquatic vegetation as well as insects, crustaceans, mollusks and sometimes even fish. Because they are ectothermic (commonly known as cold-blooded), turtles cannot regulate their body temperature and must rely on external sources to regulate their body heat. Basking in a warm spot is an important way for them to regulate their body temperature so they can more effectively swim and forage for food. They are generally most active in the warmer months from March to October. During the winter months, painted turtles may burrow into mud underwater and enter torpor, a state of short-term hibernation where their metabolism slows or stops. This has inspired a great deal of research into the mechanisms that allow them to survive under such conditions.

Painted turtles are sexually dimorphic meaning that the two sexes exhibit different characteristics beyond the differences in their sexual organs such as differences in size, color, and markings. Female painted turtles reach a larger body size than males and males can also can be distinguished by their longer claws. Mating takes place in the spring, and females come to dry land to create a burrow and lay their eggs. Turtles may also range more broadly to seek new habitat or move between different bodies of water.

Although considered a species of least concern by the International Union for Conservation of Nature (IUCN), habitat destruction and automobile mortality pose some of the greatest threats to painted turtles. If you see a painted turtle crossing the road, make sure you help it get to the side to which it was heading. However, be sure that the turtle you are assisting is not the painted turtle’s larger cousin, the snapping turtle, which can be very aggressive!