As a child and budding entomologist, I often collected caterpillars to raise to adulthood. One of the most readily discovered and easy to rear was the eastern tent caterpillar, Malacosoma americana. In the spring, you may notice their conspicuous white tents as they appear on trees. The caterpillars construct these shelters to protect themselves. Many people worry that these tents signal doom for a favorite grove of fruit trees, but usually the trees can withstand the damage, even after repeated years of colonization. These caterpillars are native insects which have a place in our local ecosystem.

There are several caterpillars which create tents and/or resemble the eastern tent caterpillar. The eastern tent caterpillar has a solid white line running down its back along with blue, black and orange markings along the sides. The head is black, and the body is covered in small light-colored hairs. A similar species, the forest tent caterpillar, Malacosoma disstria, has a very similar appearance with similar coloring, but the forest tent caterpillar has white footprint-shaped markings along its back. It also doesn’t build tents; instead it creates silken sheets to congregate on during molting. The fall webworm, Hyphantria cunea, appears in the late summer and is a pale yellow caterpillar with black markings. It creates tents and feeds on hardwoods including elms, hickory, pecan, walnut, maple and some fruit trees. 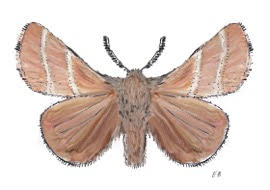 Eastern tent caterpillars hatch from their egg masses in the spring when tree leaves begin to appear. They are gregarious, and they live together in large groups in their tents, expanding them as they grow. They remain in the tent during the day to shelter from heat and predators, and emerge at night to feed on the leaves of the tree. They prefer cherry and apple species as hosts, but can be found on other trees. The fully grown caterpillars reach about 2 inches in length after 4-6 weeks of feeding, then they leave the tents to wander and look for a protected place to pupate. This is when many people notice the caterpillars walking across paths and roads. The caterpillars I reared as a child escaped from their enclosure (as often seemed to happen) and chose locations all over my bedroom to pupate, above doorways and along trim. Once a caterpillar finds a suitable place, it spins a pale cream-colored cocoon and spends about 3 weeks transforming inside. The adult moth is light brown with lighter whitish bands on its forewings. They fly from May until June, during which time they find a mate and the female lays a silvery brown-colored mass of 150-400 eggs on a tree branch. The eggs then overwinter.

Though the damage to a tree can appear extensive, it’s rare for the caterpillars to do any lasting harm. The trees are weakened by defoliation, especially by a large numbers of caterpillars. However, they can recover by putting out new leaves, often in the same growing season, and the tree can usually handle even 2-3 years of repeated defoliation. Nevertheless, the caterpillars can be removed from trees by simply knocking down or opening the tents with a stick, exposing them to natural predators such as birds. If you find an egg mass, you can also remove it in the winter or early spring, before the caterpillars hatch. Eastern tent caterpillars also have many natural enemies which control their numbers. Predators such as birds, rodents and insects feed on the caterpillars and they are parasitized by various wasp species. Diseases and temperature fluctuations also regulate their populations.

These caterpillars can be safely handled by adults and children alike, and are especially accessible when large numbers of fully-grown caterpillars are found searching for a pupation site. This can provide an excellent interaction and teaching experience. These native insects have a role in our local ecosystem and pose no serious threat to our trees in a healthy environment.