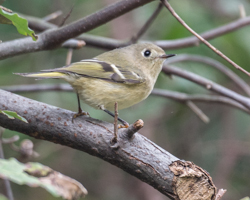 The Ruby-Crowned Kinglet, one of the smallest songbirds of North America, is now starting its yearly southward migration to, and through, Virginia. In fact, the bird’s numbers in Loudoun County regularly peak in October, so now is prime time to fnd them fitting around in trees near you.

This tiny bird, which measures about four inches in length, has olive-gray upperparts and two white wing bars. The stronger, rear wing bar is accentuated by a broad black patch immediately behind it. A prominent broken white eye ring often helps birders to distinguish the Ruby-Crowned Kinglet from the similar Golden-Crowned Kinglet. The male Ruby-Crowned Kinglet sports the vivid red crown patch for which the bird is named. More often than not, however, that patch is not seen, as the bird usually displays it only when agitated. The female lacks the crown patch but otherwise cannot be distinguished from the male in the feld.

When birding, you may frst notice the Ruby-Crowned Kinglet not by these feld marks but by its constant movement as it feeds high in trees. It moves with a short, rapid darting motion from twig to twig, often hovering in one spot briefy as it gleans spiders, insects, and their eggs from leaves and bark. When perched, it characteristically ficks its wings rapidly.

The Ruby-Crowned Kinglet is a migrant that breeds in the boreal forest from northern New England north through Canada to the tree line and west through Alaska. It also breeds in the higher peaks of the Rocky Mountains, Cascades, and Sierra Nevadas. Its wintering grounds in the east extend generally from southern Pennsylvania to Florida and through much of Mexico.

Records in eBird, a real-time, online checklist program, show the Ruby-Crowned Kinglet’s migratory movement results in a spike in the bird’s numbers in Loudoun starting in mid-September and extending through November as the bird moves south. Northward migration results in a small spike from mid-March through mid-May. Smaller numbers remain in our area throughout the winter. (About 20 are usually reported in the annual Central Loudoun Christmas Bird Count.) The bird is virtually absent here in the summer months.

When not in its breeding ground, the Ruby-Crowned Kinglet is a habitat generalist. The bird feeds in deciduous and coniferous woodlands, high in the trees as well as in the undergrowth. They often join mixed-species feeding flocks, which may include Golden-Crowned Kinglets. Kinglets can be found in Loudoun’s forests, old fields, parks, and stream banks. If you’re lucky, one might even visit a suet feeder in your backyard.