Fall Foliage: The Science Behind the Colors 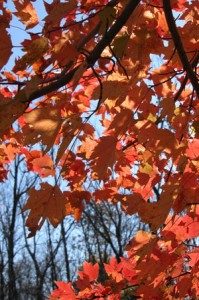 In the fall, as a response to days becoming shorter, deciduous trees cease the production of chlorophyll in order to save their energy for the winter months when sunlight is limited. During this process, a specialized region of cells where the leaf connects to the twig, called the abscission layer, cuts off the flow of minerals to the leaf. As a result of this, leaves no longer have the materials they need to manufacture new chlorophyll, and the existing chlorophyll rapidly breaks down into other chemicals.

As the vivid green of chlorophyll fades, underlying pigments such as xanthophyll and carotenoids, those responsible for yellow and orange fall colors, as well as new secondary compounds called anthocyanins, those responsible for reds and purples, shine through. The exact color of each leaf is determined by the balance of these pigments, as well as the rate at which its chlorophyll degrades. As the season progresses, the abscission layer becomes more brittle, until the leaf eventually breaks free of the twig and falls to earth to recycle its minerals into the forest floor, providing nutrients for following seasons.