Woodpeckers are some of the most charismatic birds that we often see in our area. In any season of the year, if you are near a wooded area, you are likely to hear the ostentatious call or the vigorous drumming of a woodpecker. Red-bellied Woodpeckers and Redheaded Woodpeckers are two medium-sized birds that can be found in Loudoun County. Because they have similar sounding names and they both have red on their heads, these woodpeckers can sometimes be a source of confusion for those attempting to identify them. These two species do have some similarities, but there are important differences that can help you distinguish them. 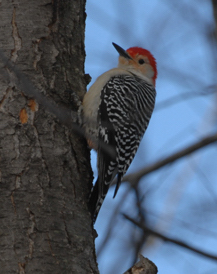 Red-bellied Woodpeckers are common throughout the Eastern United States. If you have bird feeders in your yard, you have more than likely had one visit you. Their loud, somewhat harsh calls are usually part of the soundscape that you will experience during a walk in the woods. They are around nine inches long and have a wingspan of about sixteen inches. Their breasts are tan colored and their backs are black with a pattern of white bars. Their most distinctive feature, however, is their red nape, which is the area on the back of their heads. The faces of these birds are tan. Only their napes and the tops of their heads are red. Juveniles have less red on their heads, but look similar otherwise. When they fly, you can sometimes see a white line near the wingtips. One field mark that is ironically not always obvious on a Red-bellied Woodpecker is a red belly. You can sometimes see a red wash on the bellies of these birds, but it is usually not obvious and not the first thing that you would notice. I can only think that whoever came up with the common name for them was having trouble thinking of something that made more sense.

The Red-headed Woodpecker is one of my favorite birds. The thrill of encountering one of these beautiful birds is enhanced by the fact that in our area, they are generally less common than other woodpeckers. They seldom come to bird feeders and are usually living in more rural areas with tall trees and snags often near a creek. They like hollow trees that serve as handy receptacles for acorns that they like to stash away for later. These birds are well named since it looks as though their entire heads have been dipped in red paint all the way to their necks. Their breasts are solid white and their wings solid black with a huge white wing patch. When a Red-headed Woodpecker flies, that wing patch is usually very conspicuous. Juveniles look much different than the adults, however. They have brown heads and look less clean overall. Fortunately, juveniles are usually near adults, so it is not too difficult to identify them. One of the most reliable places in Loudoun County to find Red-headed Woodpeckers is along Little River Lane near the Little River Farm on Route 15. The area near the bridge just before the Temple Hall Farm is also a good place to find them.

Now that you know the difference between these two woodpeckers, the next time someone mentions to you that they have seen a Redheaded Woodpecker in their yard, you can very gently inquire about whether they might be mistaking it for a Red-bellied Woodpecker. Both birds are beautiful, but it is nice to know which kind of woodpecker one is actually looking at.