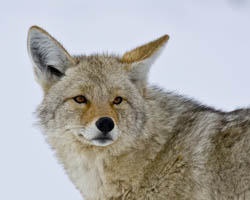 As the weather turns cooler and fall approaches, ghost tours are a common activity for Halloween enthusiasts in Loudoun County. Balls Bluff Battlefield Regional Park is rumored to be haunted with the ghosts of soldiers who lost their lives during Loudoun County’s largest Civil War battle, and several houses in Leesburg are said to be regularly visited by the spirits of their previous owners. But rather than purchasing a ghost tour, why not do a little ghost hunting in your own neighborhood?

Coyotes (Canis latrans) have been given the nickname “ghost dog” for good reason – they manage to hunt, eat, breed, and raise their young in close proximity to us, all while remaining largely undetected. Studies of radio-collared coyotes in Chicago and other large cities have followed and documented coyotes living in urban and suburban neighborhoods, their human neighbors often completely unaware of their presence. Often, it is only the sound of a faint coyote howl in the distance that sends a sudden chill down our spine and gives away the presence of these ghost dogs around us.

Although coyotes have been in Virginia for at least the last 60 years, many Loudoun County residents are unaware that they are living so close to these clever and adaptable animals. That is, perhaps, until a neighbor’s pet is attacked by a coyote (but more on that later). 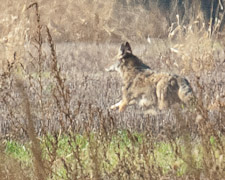 Once limited to the central part of the country, coyotes have expanded their range across the entire continental U.S., largely due to their adaptable nature and elusive ways. Commonly mislabeled as carnivores, coyotes are actually opportunistic omnivores, which is a fancy way of saying that they will eat just about anything. The majority of their diet consists of rodents (such as mice and rats) and other small mammals (meaning that they serve an important purpose in our ecosystem by providing free “pest” control), but they also supplement their diet with fruit, and will scavenge on deceased animals, including road-killed deer. The coyote’s flexible diet allows them to adapt to changes in their ecosystem over time and successfully live and reproduce just about anywhere. Although they prefer natural habitat, coyotes have been observed living in downtown Chicago, Manhattan, Los Angeles, Austin and just about every big city in the nation. They have even been observed crossing major highways with their pups and using traffic signals to navigate across busy city streets at night.

Although coyotes throughout most of the country typically weigh in somewhere between 25-35 pounds, coyotes in Virginia and the rest of the northeastern U.S. are a bit larger, weighing between 35-45 pounds. Called Eastern coyotes, or “coywolves,” the theory is that coyotes in the northeastern U.S. have more wolf DNA than their western counterparts, as a result of breeding between wolves and coyotes in past generations. There is some evidence that Eastern coyotes may hunt larger prey (such as white-tailed deer), given their larger size. It’s important to note, however, that there is no evidence that Eastern coyotes, or coywolves, are any more of a threat to people and pets than western coyotes. Indeed, wolves are much more wary of people than are coyotes, and thus it stands to reason that coywolves would be even more elusive (and less of a threat) than “regular coyotes.” 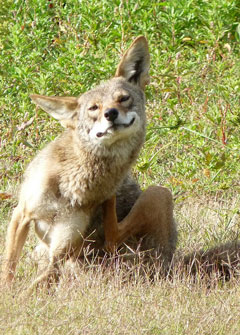 Most coyotes live up to their “ghost dog” nickname, though some coyotes in urban and suburban areas have learned that our neighborhoods provide a great source of easy snacks to supplement their diet. Pet food left outside, unsecured garbage, tidbits left on BBQ grills, and even fallen fruit can be very alluring to a hungry coyote, especially one that is looking for extra food to feed his or her pups (both the male and female play an active role in raising their young). Dubbed by many as the smartest canid on earth, coyotes learn quickly which yards and neighborhoods provide easy, free sources of food with no negative consequences. If you have seen coyotes hanging around your neighborhood or even approaching people, it’s almost certainly because they have found anthropogenic sources of food in your neighborhood and are looking for more.

The seemingly sudden appearance of coyotes in your neighborhood can certainly be alarming, but the good news is that it’s rather easy to teach coyotes that your neighborhood is no longer leaving out the welcome mat (or in this case, placemat). Remove these sources of food (and make sure your neighbors do as well!) and scare away any coyotes that you encounter by raising your arms over your head and waving them around while yelling at the coyote. Or, scare the coyote away with a whistle, air horn, or water pistol. This approach, called hazing, teaches coyotes to avoid people and neighborhoods and encourages them to become “ghost dogs” once again.

While research has shown that the vast majority of coyotes never bother domestic pets, coyotes will sometimes prey on cats and small dogs that are left outside unattended. A cat roaming around the neighborhood or a small dog alone outside in a yard look like fair prey to a coyote, just as a woodchuck or rabbit would. That’s why it’s so important to keep your cats indoors unless he or she is safely protected in a secure outdoor enclosure (such as a catio) or accompanied by you outside and wearing a leash and harness. Small dogs should also be accompanied when outside and walked on a short leash (less than 6 feet). While coyotes normally leave large dogs alone, they may view them as a threat during their breeding season (which lasts from December or January through March). As one of the only mammal species on earth that is truly monogamous, coyotes are very territorial of their mates during this time and may attack a large dog that comes too close to his mate. This can be avoided easily by walking large dogs on a short leash (less than 6 feet) and altering your walking route if you repeatedly encounter coyotes during this time of year.

Coexisting with coyotes in Loudoun County is easy; most of us are already doing it without even realizing it! Coyotes learn from our actions and follow our cue; teach them that your neighborhood is not a free buffet and they will remain our benign and helpful ghostly wild neighbors. For more information about coyotes, visit the Humane Society website.