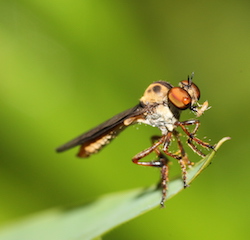 You may have seen them in your garden, perched on a plant or fencepost. Or maybe you saw one flying quickly around your yard, looking like an intimidating little insect helicopter. Perhaps they had another insect grasped tightly in their legs. These intriguing insects are robber flies. They belong to the family Asilidae. They are known as robber flies, or assassin flies, because they tend to aggressively ambush their prey midflight, before carrying them off to consume them.

Robber flies are quite common, and can be found almost everywhere. There are a total of 7,500 species described worldwide, with a little over 1,000 of those occurring in North America. They prefer habitats with open space and plentiful sun, such as meadows or near water. Forests provide too many hiding places for their prey and they are not as common there. The robber fly perches in a prominent location where it can view the surrounding airspace and scout for prey. This includes other kinds of insects, such as other flies, bees, wasps, beetles, butterflies and moths, dragonflies and damselflies, grasshoppers and occasionally spiders. Backyards and gardens are a great habitats, as long as they support abundant insect prey. 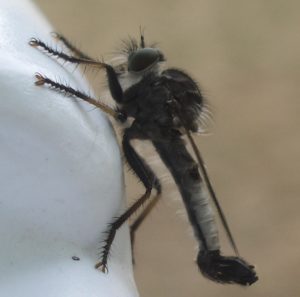 These flies generally have a characteristic look, with a thick powerful thorax and a long tapering abdomen. They are excellent, strong fliers with long powerful legs which they use to snatch and hold their prey. The fly feeds with a short, sturdy and sharp proboscis. Their saliva contains neurotoxins and digestive enzymes, which they inject into their prey. Like many other flies, they can then suck up the liquefied material. The proboscis can deliver a painful bite if they are handled. The arrangement of the eyes is diagnostic and unique to this group. The three ocelli, or simple eyes – used to detect light, are situated in a depression on top of the head, between the two large compound eyes. They also have a collection of bristles called a mystax, that resembles a mustache or beard on the bottom of the face. Some robber flies are fantastic mimics of bees, such as those in the genus Laphria. Adults range in size, depending on the species, from small – under 1 cm to large – 3.5 cm – like the Giant Robber Fly, Promachus sp.

Male robber flies search for mates and pounce on them as if they were prey. After mating, female flies will either lay eggs in a particular substrate or release them freely, depending on the particular species. All flies are holometabolous, meaning they go through a complete metamorphosis like a butterfly. They grow through several larval instars, then pupate, and emerge as adults. Larval Robber flies are also predacious. They usually live in soil or rotten wood and overwinter in this developmental stage. The life cycle of a robber fly can take 1-3 years. The high biodiversity and predatory activity of this group make them very important to ecological food webs. They control populations of other insects, and provide food to animals such as birds and reptiles. Some species can be quite beautiful to observe, with striking large green eyes and elaborately patterned fluffy bodies. Like all our other native insects, they have an important place in a healthy environment.