How the waiting countryside thrills with joy when Bluebird brings us the first word of returning spring … reflecting heaven from his back and the ground from his breast, he floats between sky and earth like the winged voice of hope.
WL Dawson, Birds of Ohio (1903) 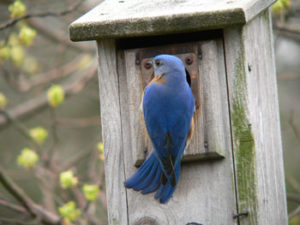 Have you ever seen a bluebird? Perhaps sitting on a telephone wire or a fence post? Or, glimpsed a flash of blue as one flew by? Eastern Bluebirds are not an uncommon sight for many of us in Loudoun County, especially in our more rural areas. We are fortunate their beauty and song continue to grace our countryside. This is due, in no small part, to the efforts of thousands of ordinary people establishing and monitoring bluebird trails here and across the U.S.

One hundred years ago, bluebirds were one of our most plentiful songbirds — as common as their cousin, the American Robin. Early English settlers called them ‘blue robins’ because they reminded them of their beloved English Robin back home. Flocks of bluebirds migrating north were one of the first signs of approaching spring. Hearing their mating call meant that spring had indeed arrived! They have long been a symbol of hope and happiness in our culture, celebrated in story and song.

However, we almost lost these gentle and beautiful creatures. By the early 1960s, their numbers had plummeted by 90%. Habitat loss, the use of pesticides, and the introduction of competitive, non-native bird species (House Sparrows and European Starlings) caused their numbers to decline drastically through most of the last century.

People became increasingly distressed as the bluebirds started disappearing around them. They realized that their children were growing up not knowing what a bluebird looked or sounded like. Individuals, such as Thomas Musselman and Lawrence Zeleny, began raising the alarm, writing articles and books urging people to set up bluebird trails. These ‘trails’ of nest boxes would replace the tree cavities that were no longer available, but which bluebirds needed to raise their young.

Hundreds of people wrote letters to Zeleny in response to his articles. He saved all these letters over the years in paper grocery sacks. When Zeleny met with a group of friends in 1978 to discuss forming an organization to help bluebirds, they decided to write to everyone who had sent Zeleny a letter. Three hundred plus people responded to this appeal and became the founding members of the North American Bluebird Society. Since then, affiliated state societies have sprung up all around the country, including the Virginia Bluebird Society in 1995.

What can you do to help? If you have bluebirds around your property, consider putting up a bluebird house or two. But first, learn to be a good steward of your boxes. There is a lot of information available on the VBS and NABS web sites. Interested bluebird lovers can also come to Loudoun Wildlife Conservancy’s annual bluebird-monitoring training session this February. We add more trails every year and are always looking for new volunteers.

Please provide food for the bluebirds: plant some winter berry-producing trees and bushes, such as dogwoods, hollies, Eastern Red Cedars, and chokeberries. Bluebirds depend solely on berries during the winter months when insects are not available.

Bluebirds are back because of our efforts, but it is an ongoing battle. Habitat loss continues at a rapid pace, as well as competition from aggressive House Sparrows. Bluebirds willingly accept our help and readily move into provided nest boxes. If you are lucky enough to have a bluebird pair move into your nest box and raise their family, you are in for a delightful treat!