A Snowflake by Any Other Name … 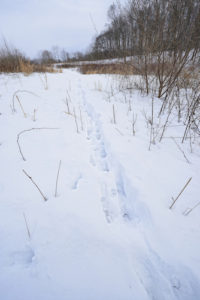 Flocons de neige. Schneeflocken. Fiocchi di neve. Snøfnugg. They go by many different names. In English we refer to them as snowflakes, but they sound equally magical in any language. People from all cultures and all corners of the world are drawn to their windows to watch the flakes flutter and swirl their way towards the earth, blanketing everything as far as the eye can see in a wash of white. We are fascinated by their delicacy, overjoyed by catching them on our tongue, saddened by the first footstep placed in a virgin meadow of snow. Each fresh snow brings with it a new excitement, but few of us give much thought to how those snowflakes came to be, and what makes them so remarkably unique.

We have always been told that no two snowflakes are alike, but is this really the case? The odds are certainly against it, but technically it’s not a complete impossibility. And, most of us probably believe that a snowflake is simply a raindrop that freezes during its descent towards the earth.  It is actually much more complex than that.

A snowflake is formed by water vapor while still inside a cloud. Clouds are comprised of water droplets that have collected around dust particles, pollen, and other microscopic debris in the air. This collection of particles serves as a base on which the water vapor adheres, allowing ice crystals to form. A snowflake can be a single ice crystal, which looks quite blasé to the naked eye, or multiple crystals, which can result in extremely intricate patterns that form the lace-like flakes similar to those we cut from paper in kindergarten. The more elaborate snowflakes are formed through branching, where ice crystals attach themselves to bumps, or imperfections, on a simple ice crystal. This process is repeated by water vapor bonding repeatedly to similar protrusions on each individual branch until feathery, fern-like patterns are created, resulting in fantastically complex crystal formations.

While technically no two snowflakes are ever exactly the same, some of the more simple structures and patterns formed by newly formed ice crystals can be quite close. However, these crystals are formed from such a small number of molecules they are impossible to see with the naked eye. The more complex the crystal becomes, the more unlikely you will find an exact match, as there are millions and millions of possible patterns and combinations.

There are all sorts of activities and explorations one can do to learn more about snowflakes and the beauty that lies within their magical framework. The websites below will give you a good place to start. And while finding a matching pair of snowflakes might be rather like trying to find a needle in a haystack, it sure is fun to try!