By Elizabeth Dennison, The Raptor Conservancy of Virginia

Imagine sitting on your back porch watching a lively gathering of songbirds darting around your bird feeder, taking turns on the perches, and pecking at the seed dropped on the ground. There might even be a squirrel planning his next acrobatic maneuvers to outwit your cleverly designed “squirrel-proof” feeder. Suddenly the chirping birds and the squirrel are gone — replaced by a gray streak that zooms by looking for its own meal. Cooper’s and Sharp-shinned Hawks are hungry, too!

Cooper’s Hawks (Accipiter cooperii) are crow-sized woodland raptors found throughout southern Canada, the United States, and Central America. Some move south in winter, but many remain near their breeding territory year round. They prey primarily on medium-sized birds like starlings, mourning doves, and robins but can also take pheasants, grouse, and chickens. Although birds are their preferred diet, Coops will eat mice, bats, and other small mammals as well. They are among the few raptors with the speed, maneuverability, and cunning to take squirrels.

Coops are inconspicuous birds with a rusty barred breast and a dark bluish-gray back and crown.  Their wings are relatively short, broad, and rounded at the tip for powerful acceleration. Their rounded tail is long with four alternating bands of light and dark brown ending in a wide white strip. The long tail is used as a rudder and ensures maneuverability at top speed through dense woods. Coops are impressive fliers but aren’t averse to pursuing prey on the ground. They are fast runners and can aggressively follow their quarry through even the most tangled undergrowth. Males and females have similar plumage, but the male coloration may be brighter. As is the case with most raptors, females are about a third larger than males. Young Coops wear juvenile plumage for about a year, possibly to protect them from attack by territorial adults. Juvenile Cooper’s Hawks have dark brown upper parts, light buff under parts, a sharply striped breast, and yellow eyes. The striking red eyes of mature birds reflect their intense and high-strung personality.

Cooper’s Hawks are often confused with their smaller cousins, Sharp-shinned Hawks (Accipiter striatus), who also visit our backyard feeders. Sharpies are jay-sized but otherwise very similar in appearance and behavior to Coops and may be indistinguishable without careful observation. Size is difficult to judge in the field and is not a reliable indicator because a female Sharpie is about the size of a male Coop. The most easily observed difference between the two species is the shape of the tail. Coops always have a rounded tail while Sharpies have square tails, but even this is unreliable if the feathers are worn or damaged. Coops often raise their hackles — the feathers on the back of the head — which are never seen in Sharpies. In flight, the head of a Sharpie barely extends beyond the leading edge of the wings, giving the bird a stubby, almost headless appearance. The head of a Coop protrudes well beyond the wings — like a turtle extending its head fully — giving it a cross-like appearance. Sharpies fly with quick, hurried wing beats too fast to count. The Coop’s wing beats are slower, deliberate, and easily counted. 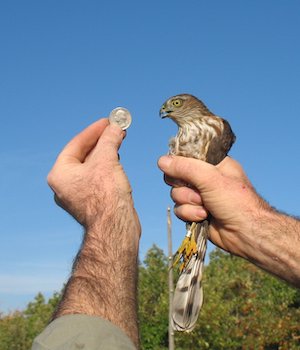 Sharp-shinned Hawk and a quarter
Photo by Liam McGranahan

In the past, Coops and Sharpies were frequently killed for preying on chickens and game birds. Poultry farmers and hunters would have gladly welcomed their extinction. This attitude persisted until well into the twentieth century when the hawks came under the protection of the Migratory Bird Treaty Act of 1972. Even today, some people are dismayed by hawks in their backyard, but it is important to understand hawks as part of a natural process. Hawks take only what is needed for survival and select the weakest and least wary, thereby supporting the overall health of the flock. While your bird feeder may look like a buffet of vulnerable songbirds, there are many pairs of eyes watching for any sign of danger.

Life for raptors is not easy: 75-80% die in their first year due to predation, accidents, and starvation. Even after that perilous first year, life is hard. Only 20-30% of the hawk’s hunting attempts are successful so the threat of exhaustion and starvation is always present. In a study of more than 300 Cooper’s Hawks, 23% showed healed-over fractures from high-speed collisions with both natural and man-made obstacles. Life is most challenging for the males, who must pay close attention to the intentions of the larger females. Under some circumstances, she may see the smaller male as the perfect size for a good meal!

Because we increasingly share our territory with Cooper’s and Sharp-shinned Hawks, encounters with them are common. They are hit by cars, fly into windows, and sometimes manage to get into buildings. Last winter, a hungry young female Cooper’s Hawk became famous when she followed a pigeon into the Library of Congress. She spent several days perched in the dome of the reading room before being lured down. After a short stay at the Raptor Conservancy of Virginia to build up her weight, she was released at Sky Meadows State Park, where she will help control the population of non-native house sparrows and starlings.

Coops and Sharpies are feisty birds that have survived direct persecution and the disastrous effects of DDT on their populations. Thanks to legal protection for raptors and the ban of DDT, we now see them adapting to suburban and urban environments. The sight of one of these birds threading its way through dense woodlands, appearing out of nowhere around the corner of your house, or running at high speed after its prey is thrilling. When you see a hawk hunting in your backyard, know you are witnessing the drama of nature as it is meant to be.

If you see a raptor that appears to need assistance, please call the Raptor Conservancy of Virginia at 703-578-1175 or another qualified source before trying to assist the bird. An injured raptor will defend itself with its talons, putting you at risk of injury if you don’t know how to approach it. If you have picked up the bird, put it in a securely closed cardboard box or plastic pet carrier of appropriate size in a quiet, dark location until transport can be arranged. Do not attempt to feed or give water to an injured raptor but please act quickly as speed of assistance is essential to its survival. Guidelines for handling an injured raptor are on the RCV website, www.raptorsva.org.