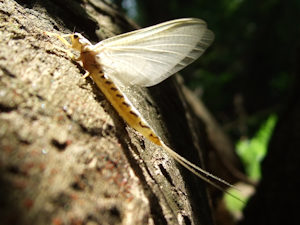 My sister learned to fly fish in Wyoming and Virginia’s New River Valley. She loves showing off her collection of flies, and even though I’m not into fishing, I have to admit that the colorful tufted faux insects are eye-catching. Some of my sister’s favorite flies are made to imitate the bright colors and curved abdomen of the mayfly (Anthopotamus myops).

It’s no wonder fishermen prize the mayfly.  This insect’s breeding and hatching, which occur in massive swarms, create a feeding frenzy for trout and other fish, as well as many birds such as warblers and waxwings.  The increasing population of fish near a mayfly swarm attracts larger birds such as kingfishers and hawks.  The mayfly’s swarming hatches can be quite a sight to behold, drawing naturalists and fishermen along with many species of birds and aquatic life.

There are many types of mayflies throughout the world, ranging in size from a quarter inch to over an inch and in color from a dull brown to a brilliant yellow.  All of these mayflies (of the order Ephemeroptera) share some basic characteristics.  Mayflies have only a single day to breed and lay their eggs.

The larvae hatch and burrow into the bottom of streams and creeks; some species will stay buried for up to two years before emerging for an adult life that can be as long as a few days or as short as a few hours.  These delicate insects are frequently found around the water, which they need for breeding and egg laying.

Mayflies are easily recognized by their curved bodies, their folded and upheld wings, and the two or three long “streamers”—correctly called “caudal filaments”—that appear like tails at the end of their abdomens.  Mayflies have mouthparts, but they never use them; all of their feeding occurs during the larvae stage.

Cliff Fairweather of the Audubon Naturalist Society’s Rust Sanctuary in Leesburg also notes that mayflies have another special characteristic: They lose their exoskeleton and wings after achieving their adult form.  This molt causes a change in the color of the insects: before the molt, mayflies are usually a dull color (called “dun” by fishermen).  When the exoskeleton is shed, the insects have new clear wings.

Mayflies are an important element of a healthy stream ecosystem.  These insects typically have a low tolerance for pollution, so they will only remain in a clean, healthy stream.  Their massive breeding and hatching swarms might make an insect-phobic person squirm, but those swarms are a jubilant sight for anyone who prizes the health of streams.  Those swarms are a happy sight for hungry birds and fish, too!