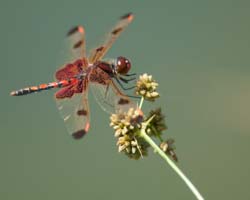 I became interested in dragonflies and damselflies (insect order Odonata, or informally, “odes”) a few years ago. At that time, I had been an avid birder for several years and figured that just as there are for local birds, there would be plenty of resources available that could tell me where to find dragonflies, which species of dragonflies have been found in Loudoun County, and what times of the year each species can be found.

It seems that almost every local park has a brochure that lists which birds have been seen in the park and at which times of the year they are likely to be seen. To my disappointment, I found that such resources for odes were few and far between. So, I decided to keep track of the dates and locations of all of the species of odes I encountered on my field trips. I had no intention of publishing this data; it was just for my personal use and edification.

Shortly after I began keeping records, a couple of friends, Kevin Munroe and Tony Robison, who are working on a field guide to the local dragonflies, decided to expand the range of their field guide from just Fairfax County to include all of Northern Virginia. They asked my help in locating and photographing species in eastern Loudoun County.

As a result, Kevin and I spent many hours in the field (well, actually more like in the water) this past year and discovered some great locations in Loudoun County for Odonata, as well some interesting and unusual species. It was about this time last year that Nicole Hamilton asked me if I wanted to publish this data as a checklist for Loudoun Wildlife Conservancy. I was happy to oblige, and Nicole has done a great job putting the Dragonflies of Loudoun County checklist/brochure together.

When I first started looking for odes in Loudoun, the county checklist at OdonataCentral.com contained about 30 species. Apparently, very little surveying had been done, since many of the more common species were not included on the checklist. Now about two years later, the new Loudoun Wildlife Conservancy checklist contains more than 70 species, with more surely out there but not yet discovered. Anyone is able to submit new dragonfly or damselfly records through that website, so if you photograph anything new to your county or state, please contribute to the database. 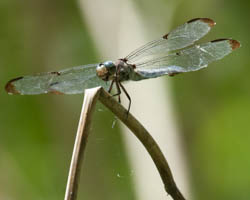 Most of the lifecycle of dragonflies revolves around aquatic habitats, so I looked for odes near water. The insects are most active on warm, sunny days, so cloudy days were better spent birding. Different species prefer different habitats; ponds, wetlands, creeks and rivers will support different species. Some of my favorite spots in the county are Bles Park in Ashburn, which includes a wetland and is bordered by Broad Run and the Potomac River; Banshee Reeks in Leesburg, which has ponds and wetlands, and is bordered by Goose Creek; and various other spots along Goose Creek.

I always brought along my close-focusing binoculars and digital camera to help identify and record what I had seen. By being patient and approaching slowly I was able to get close-up photographs of perched dragonflies and damselflies. By viewing the photographs at full-size on my computer’s monitor, I was often able to identify the species, which was not always possible with the naked eye or binoculars.

For some species, the only way to identify them was to catch them with an insect net and identify and photograph them in the hand. I always first got permission for catching and releasing the insects from the land owners or park managers before using my net. I kept a list of everything I had seen each trip, and any time I photographed a species that was not on the Loudoun County list published at OdonataCentral.com, I submitted my photographs and sighting information to the web site.

One highlight of this past year’s ode searches was finding a Spine-crowned Clubtail (Gomphus abbreviatus), a species that has been recorded only a few times in this area in the past 50 years. Another locally uncommon dragonfly, a Taper-tailed Darner (Gomphaeschna antilope), I unexpectedly found perched outside the door of my fourth floor apartment, right off of Route 7. And, there is still plenty of opportunity for anyone to add to our knowledge of odes in Loudoun County, which is part of what makes studying these insects so much fun.

The species and flight time data for Loudoun Odes is far from complete. Therefore, if you see any new species or ones already recorded but in months that are not marked on the Loudoun Wildlife Conservancy checklist, please contribute your findings by submitting your sighting, preferably with some photographs, to Contact Us. One great way to get started enjoying dragonflies and damselflies is by joining us on our monthly butterfly and dragonfly walks. Look in the Habitat Herald for the schedule. We usually have one walk each month, from May through September.

In the meantime, here are a few suggestions for dragonfly and damselfly field guides and other resources to get you started:

Dragonflies Through Binoculars by Sidney Dunkle
This field guide includes all of the dragonflies in North America and is a must-have if you have more than a casual interest in identifying dragonflies.

Damselflies of the Northeast by Ed Lam
One of my favorite field guides and the best damselfly guide for this area, it contains all of the damselflies that you can expect to find in Loudoun County.

Web Resources:
Odonata of Maryland & Washington D.C. – http://www.marylandinsects.com/MDDCOdonateRecords.html
An annotated list of all the odes recorded in MD and DC. Montgomery, Frederick and Washington counties in Maryland are just across the river from Loudoun and likely share most of the same Odonate fauna.

Odonata Central – http://www.odonatacentral.com – Go here for any county or state checklist, submitting new records, viewing range maps for any species, and much more.