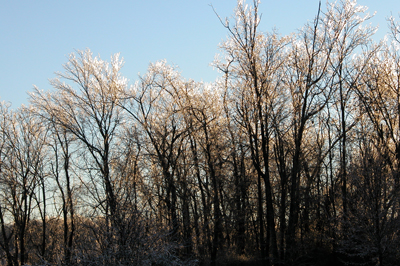 To the 57 people who participated in the Ninth Central Loudoun Christmas Bird Count (CBC) on December 28, 2005, THANK YOU!  Without your willingness to give up a day during the busy Christmas season and head outside to count every wild bird you saw we would not have had such a successful year.  In spite of fewer people participating than previous years we were able to cover every part of the circle though a few corners probably weren’t investigated quite as thoroughly as they have been in the past.

A special thanks also needs to go to all those land owners who grant us permission to search their properties.  Much of Loudoun’s best natural habitat is still found on private property or public land which is rarely accessible.  These permissions and the many people who do the actual counting combine to make the Audubon Christmas Bird Counts the most successful example of citizen science there is.

While we counted fewer owls and waterfowl than we do most years, a Long-eared Owl was found. We had high counts for a number of species, including 175 Common Mergansers, 524 Fish Crows, seven Catbirds, an extraordinary 8,802 American Robins, most of them seen by Phil Merritt along the C&O Canal in Maryland , and 68 Swamp Sparrows.  Like many other local counts this year we had high numbers of Red-breasted Nuthatches (26), Golden-crowned Kinglets (81), and Purple Finches (81).  While we saw fewer Red-tailed Hawks (91), we saw a lot more Red-shouldered Hawks (80).

One of the more interesting aspects of the count is that now, with nine years of data, we can start to monitor trends in our local bird populations.  For example, there was a large decrease (over 50 percent in some cases) of Carolina Chickadees, Tufted Titmouse and Eastern Bluebirds in both 2003 and 2004.  Much of this decline is probably a result of a very cold and wet spring in 2003, but other factors such as West Nile Fever may have also played a role.  It appears that all of those species have rebounded to their pre-2003 numbers.  Unfortunately, other species, such as Northern Bobwhite, have virtually disappeared from the area and do not seem to be making a comeback.

Over 30 of us finished the day with a Tally Rally, underwritten by the Loudoun Wildlife Conservancy and the Bird Feeder.  Darrell and Jane Schwalm coordinated the dinner and were assisted by Sandy and Warren Reufer. Without them the Tally Rally would never have occurred let alone been such a fine way to end a great day of birding!