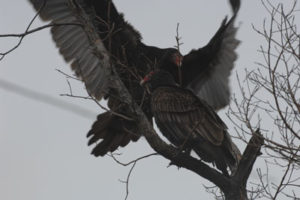 Turkey Vultures….they get a mixed response around here, but in certain parts of the country, namely Hinkley, OH and Kern, CA, they are celebrated through festivals and gatherings.  Turkey Vultures truly are amazing, and they play a critical role in our environment.

Turkey Vultures are scavengers and sanitarians ― they help recycle the bodies of dead animals but also sanitize the area for us.  The corrosive enzymes in their stomachs and sophisticated immune systems are able to kill a number of deadly organisms, including salmonella and bacteria that cause anthrax, hog cholera, and botulinal toxins.  At present, Turkey Vultures are the only animal in the world known to have this ability.

If we did not have Turkey Vultures, we would be overrun with disease and polluted waters.  This very scenario occurred in India, South Africa and Spain when vulture populations plummeted due to poisoning, shootings and an avian virus. Realizing they needed the vultures, the governments of these countries established captive breeding programs to reestablish the populations and bring the environment back into balance. Today, “vulture restaurants” have been created to ensure that these wonderful custodians are healthy and are able to thrive. 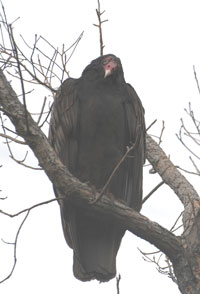 Turkey Vultures are very social birds that mate for life.  They are slow breeders but live to be 40-50 years old.  The birds soar together in groups, sometimes forming large spiraling kettles as they catch updrafts.

We can watch them as they play tag, follow-the leader and engage in speed soaring as they fly straight up into the sky beyond our eyesight and then dive back down.  When they are not flying for fun, they are flying in search of food.

Their eyesight rivals that of hawks, and this allows them not only to see dead animals by roadsides and elsewhere but also to watch the movements of other vultures who may identify a meal.  One study estimated that vultures canvas an area of 11,000 acres in search of food.

Turkey Vultures eat dead animals, and their favorite food is dead snakes.  However, when food is scarce, they have also been known to eat vegetables such as rotting pumpkins and sometimes fruit and grasses.

In addition to sight, Turkey Vultures use their sense of smell to locate food.  In fact, they are one of the few birds that actually have a sense of smell.  However, the carrion needs to be at least 12 days old for them to smell it; and, as anyone would, they prefer freshly dead animals to those that are more decayed.  Vultures tend to feed through mid-day and spend the later afternoon searching for the next day’s meal.

At night, Turkey Vultures roost communally, joining together about an hour before sunset to sleep in tall trees or on towers.  They maintain fidelity to their roosting sites, passing on the location from generation to generation.

Some roosting locations have been used for over 100 years. The roosts are thought to serve as information centers where the birds share information about where food has been found.  Because they have no syrinx (the equivalent of a bird’s voicebox), they communicate quietly through a series of hisses and grunts.  In cases where the food is plentiful, such as the site of a dead deer or cow, the birds will even communicate to other flocks that a meal is present.

In the morning, Turkey Vultures are often seen standing on tree limbs with their wings outstretched to the sun. They are a very lightweight bird with long hollow bones filled with air. As the sunshine warms them, the air in their wing bones expands, warming them up and making it easier to fly. During this warming time, a bird may fly up only a few hundred feet to test the air and look for thermal currents. If the conditions are not right, they will return to their spot to warm in the sun some more.

In the fall, Turkey Vultures from northern areas migrate southward, congregating in large groups through September and October.  Here in Loudoun County, we have Turkey Vultures that stay with us year-round, but in the fall we see our numbers swell for a few weeks as migrators pass through, stopping for a few days along their journey. Those that continue southward will fly in large kettles that circle steadily southward through Mexico and Central America reaching Panama and other points further south.  Peak flights over Panama City in November have reached over 2,000 Turkey Vultures per day.

For those that migrate, their winter is spent cruising the rainforest canopy searching for food.  In late winter, they begin their movement northward and travel by day from Panama back through our area and into the Midwest and other points north, covering over 3,000 miles in ten days without stopping for food. On this trip, they often ride the winds of storm fronts, flying at over four miles high. They arrive at their destinations in the Ohio area on or about the Vernal Equinox (around March 20th) each year at numbers reaching over 50,000, right in time for the Turkey Vulture festival!  Because many migrating Turkey Vultures will fly through our area during this spring migration, we see our numbers swell for a few weeks just as we do in the fall, although certainly not to the numbers experienced in Ohio.

Cathartes aura, the Latin name for Turkey Vultures, translates as Golden Purifier or Cleansing Breeze.  American Indians called these birds the “Peace Eagles” and regarded them as a symbol of strength in accepting difficulty.

Here in Loudoun, Turkey Vultures have not received the respect and gratitude that they have in other parts of the country, but they certainly deserve it. These birds should be welcomed for the incredibly important service they provide.

If not respect and appreciation, they should at least receive our tolerance.  For those interested in learning more about Turkey Vultures, The Turkey Vulture Society has a website with additional information and resources: https://turkeyvulturesociety.wordpress.com/the-turkey-vulture-society/

For more great information on vultures, Listen to our Vultures Podcast. You can also try out our Vultures crossword puzzle.