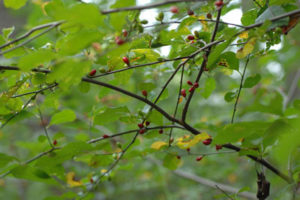 Spicebush is a wonderful shrub often found growing wild in damp woodland areas, in thickets, and along stream banks.

According to Enature.com, “In the North this plant is thought of as the ‘forsythia of the wilds’ because its early spring flowering gives a subtle yellow tinge to many lowland woods where it is common.”

Spicebush (Lindera benzoin) spreads through its roots as well as through dispersion of seeds by wildlife.  Its aromatic leaves are bright green throughout spring and summer but turn yellow in fall. The leaves have a spicy smell when crushed or scratched, which may be why deer turn up their noses at the taste of this plant. 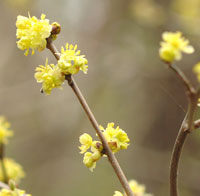 In early spring, before its leaves appear, the Spicebush produces dense clusters of tiny, fragrant yellow flowers that scent the air and attract various insects, including our early emerging bees.  Both female and male plants are needed to produce the red berries that ripen in fall.  The berries each have one large seed.

The bright red berries are very valuable to wildlife and are especially favored by thrushes, bluebirds, Catbirds, Eastern Kingbirds, Mockingbirds, Great-crested Flycatchers, Phoebes, Brown Thrashers, Vireos and others.  In addition to birds, Spicebush is a great attractant for the Spicebush Swallowtail butterfly and the giant Prometheus Silk Moth, both of which use Spicebush as the host plant on which to lay their eggs.  After hatching, the caterpillars then feed upon the plant.

People can also enjoy Spicebush.  The berries, which taste a bit like allspice, can be used as a seasoning, and a tea can be made from the aromatic leaves and twigs.  Spicebush leaf, bark, or berry tea compresses are also good for mild skin irritations, such as rashes, itching, and bruises.