These words were well known to our family after we moved to our small farm. Being conscious of your surroundings and what or who is in it applies to the country as well as the city. 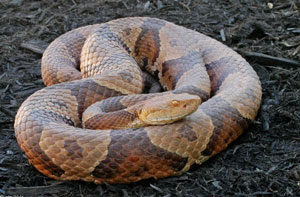 Copperheads live in forested ravines, rock outcroppings and edges of floodplains. Our farm is prime habitat for copperheads as well as other snakes. We live midway up a hill in the middle of two ravines surrounded by old growth woods with lots of rotted logs, rocks and with a stream nearby.  We were disturbing things by building a house.

The children were quickly taught not to walk outside barefoot in high grass, not to stick their hands or feet carelessly under rocks or logs and to look where they were going.  I made a snake stick, a piece of plastic pipe with some macramé rope through it with a loop on the end to pick up and move any poisonous snakes that were nearby the house. The hardest person to convince to move snakes was my husband who had stepped on a cottonmouth as a young Marine in training.  He had a real loathing and fear of snakes because of his experience of being bitten.

Many people have a fear of snakes without having been bitten and the first thing they do when they see one is to want to kill it.  How many snakes have you seen thoughtlessly run over in the road?  It was important that our children be taught about snakes so they knew which ones were safe to handle if they wished and which should be admired from afar.

It was also important for my husband. Ring neck snakes were always the favorite and handled by everyone even though they sometimes left a musky odor. Queen snakes found down in the stream were beautiful to watch while they fished in the water. Garter snakes were seen eating frogs, and black snakes, both the racer and the black rat snake most often were seen on trails or roads.

Copperheads are beautiful snakes. They have a thick, stocky body and their head is diamond shaped. Their coloring is pinkish beige with a repeating hourglass pattern of darker brown-black surrounding a dark copper coloring. Young copperheads resemble the adults. They have the hourglass or bowtie patterning although below the tip of the tail is bright yellow and the young are paler.

I wanted to know how aggressive copperheads could be in case the children were ever near one. I saw one on the road one day and stopped. I found that copperheads are not aggressive snakes. They are also not fast snakes; they like to stay where they are.  It takes a lot of disturbance to get them to strike and their striking distance is not long.  If you are familiar with their habitat and look where you are going, it’s highly unlikely you’ll ever get bitten.

Here are some of our snake tales :

Our neighbor was remodeling his old house. He always slept with shotgun by his bed.  One night he woke up to see a snake on the bedroom floor and picked up his gun and shot a hole through snake and the floor. If he’d had a snake stick, it would have saved his floor and the snake.

I was planting an apple tree one day with Noodle our friendly yellow lab nearby, about five feet away.  Not once but three times Noodle bent down to sniff something.  On the third time she ran backwards ten feet yelping all the way.  Checking her over revealed two dripping fang marks on her muzzle, otherwise she was normal.  I called the vet who said to observe her. We finished planting the tree and started walking up the hill when Noodle started to stagger and lay down.

We went to the vet for an examination and antibiotics. Noodle’s head swelled up about three times normal size.  She was in a lot of pain and garnered lots of sympathy and love. She is fine other than a large series of scars on her flew and some loose skin on her throat.  I learned once again that it really does take a lot for a copperhead to bite.  Since Noodle received a lot of venom she had lots of swelling and pain. But she didn’t die and Noodle never got bitten again.

Our son Josh was loading garbage into the van for the monthly run to dump, picked up the garbage bag from outside bin (designed to keep bears, dogs, raccoons and possums out but evidently not snakes and mice)  “Mom, Mom there’s a snake in one of the garbage bags, I think it’s a copperhead”.  I got my trusty snake stick and indeed did find a copperhead.

We moved it down into the woods away from the house.  For weeks afterwards I worried about going to the dump and finding a snake en route to the dump loose in the van. I appreciate them, I enjoy seeing them but not loose in the vehicle I’m driving! The snake stick goes to dump with me and trash bags are examined carefully.  The trash bin is finally deserted for storing trash in our house.  It smells sometimes, but there are no surprises!

One hot muggy day, we had our windows open on the top floor. As we were leaving we looked up to see a snake on our trellis, probably having just eaten the baby cardinals that had been nesting nearby but were now nowhere to be found. A closer look revealed the snake to be a copperhead. Since it was near our bedroom window, we shook the snake down. Needless to say the window got closed, air conditioning got turned on and the trellis was removed.

These tales are not meant to scare anyone but to explain that it is possible to live in an area with poisonous snakes, or any snake, and not be harmed by them.  Because of where we live, we have had the privilege of seeing many different types of snakes and other wild animals.  Snakes react like humans; in fact they act like many living things.  If cornered or stepped on, they tend to react aggressively while trying to get away; if left alone they go harmlessly about their business.

Even if you find snakes frightening, remember the poisonous snakes in our area are non-aggressive.  Also, because of the pests they eat, these creatures are very beneficial.  If you see a snake on the road, please do not run over it; it may be shedding its skin or crossing the street to hunt.  Snakes are fascinating to observe — just be aware, prepared and appreciative of all of nature’s wonders.