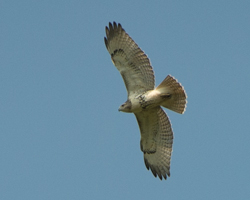 Have you ever wondered why you see so many hawks along the roadsides of Loudoun County during the winter months or wondered what type of species they are? Well, you are not alone. Many people have asked the same questions.

One of the simplest explanations for the greater number of hawks during winter is that the trees have lost their leaves, making it much easier to see the hawks that have been there all along. Another reason is that the immature hawks, born in the spring, are out hunting on their own. These young hawks increase the population by nearly threefold. But perhaps the greatest reason is the unique topography and rural nature of Loudoun County itself. On the western edge of Loudoun lie the Blue Ridge Mountains. During the fall, the topography of this north/south mountain ridge serves a vital role as a major migratory path for birds of prey. In fall, the winds that so effectively sweep the leaves off our deciduous trees also help to channel thousands upon thousands of raptors along this windswept ridge to the south. The sheer number of raptors moving along this thin corridor is awe-inspiring. For example, just three years ago, the greatest concentration of Broad-winged hawks ever seen in a single day in the United States -19,000 strong- passed over Snicker’s Gap. Many of the migrating hawks and falcons stop and hunt in Loudoun along the way. In fact, because of its rural environment, Loudoun County lays out the welcome mat and becomes the winter home to many hundreds if not thousands of these migrating raptors. They settle here to take advantage of the mild weather and huge prey base (mostly field mice) found in fallow fields around the county. 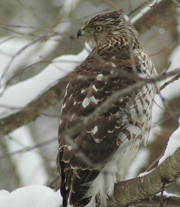 What type of raptors are you seeing? If you thought most of the hawks along the road might be Red-tailed Hawks, you are correct. The Red-tailed Hawk is the most commonly seen raptor in North America and, indeed, in Loudoun County. Although highly variable, Red-tails are most easily recognized by their large size, a prominent white breast, and dark belly, not to mention the red tail of the adults.

Red-tails are not the only hawks to call Loudoun home. Some of the hawks you see may actually be Red-shouldered Hawks (slightly smaller, with a black and white barred tail and a redder chest than the Red-tail) or the more secretive Cooper’s Hawk, one of the three forest raptors found in North America. Both of these hawks take advantage of the abundant prey feeding in the grassy edges and medians of the roadsides. 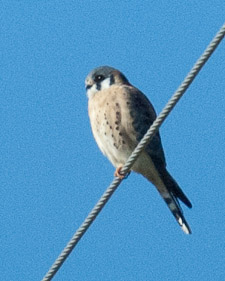 Some of the smaller hawks might not be hawks at all, but a colorful type of falcon called the Kestrel. They often hunt by perching on branches a few feet above the grass or by sitting on power lines. If you look closely, you may see one pump its tail back and forth, a key behavioral characteristic of the Kestrel.

Other raptor species can be seen from the road as well. Northern Harriers, formally called Marsh Hawks, often hunt large grassy areas near the roadsides and further afield. Their low, coursing flights across meadows, along with a white rump patch above a long thin tail, make them easy to identify. In late winter, an occasional Rough-legged Hawk may drift down from its tundra haunts to hunt here as well. Like the Harrier, it has a white rump patch above the tail, however the tail is not as long, nor do Rough-legs fly in the same manner, as do harriers. Rough-legged Hawks are more likely to hunt by sitting on the thinner outer branches of a small tree or “kiting” into the wind over an open field.

The next time you’re driving, enrich your trip by taking stock of Loudoun County’s winter raptors. With thirteen species of diurnal raptors and seven species of owl, Loudoun County is teeming with raptors during the winter months. Should you decide to venture away from the main roads you might be surprised how many species you can find.