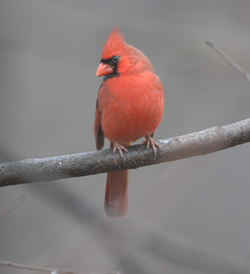 Part of the joy of backyard bird feeding is the chance to get close to and observe bird behavior. The cardinal, with its wide territory range and ease in which you can lure it with the right feed, is likely to become a welcome year-round guest.

It is difficult to find a more melodious and beautiful bird anywhere. Once known as the Virginia Nightingale, in recognition of its beautiful song, the common name today is the Northern Cardinal.

So, chances are that your yard is a perfect place to attract cardinals.

They are not too finicky eaters, taking a broader variety of feed than many birds. Although, they prefer sunflower seeds — especially the cracked or stripped varieties.

A partial list of other foods they will eat are: cracked corn, suet, millet, peanut hearts, and nut meals. They supplement the foods from the bird feeders with other foods they can gather such as berries, pine seeds, and insects.

Many of the most destructive garden and farm insects are eaten by cardinals, which is one way the cardinal repays his debt to humankind.

Another way the cardinal earns his keep is by bringing a nature show to your backyard. It is a bird of fascinating habits and is doubtless one of the reasons why bird watching has been called ” America’s largest spectator sport.”

Part of the fun is that the cardinal who comes to your feeder may be unique in certain respects: if you were to compare the cardinal’s song and habits with a friend’s observations from another state, you are likely to find some differences. These differences can range from timidity, or comfort with humans, flocking instincts; nest building techniques, acceptance and coexistence’ with other bird species, food preferences, length of breeding season, and number of broods a pair of cardinals will raise. Watch the birds around your feeder for distinct behaviors.

The more universal habits of cardinals make it an endearing bird. For instance, it is a wonderful joy to observe the relationship between a pair of birds. 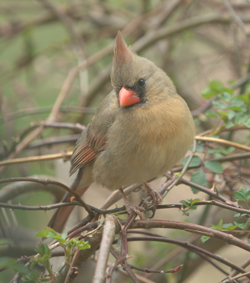 Cardinals are monogamous. When the female is not nesting, you will see them come to your feeder in pairs. During the breeding season, which begins in the spring, the male appears to be particularly loving toward his mate. He will bring her food offerings. As she crouches with open beak — and rapidly twitching wings — he will hop by her side, tilt his head just so, and place the food directly into her bill.

You are just as likely to be entertained by a cardinal’s music as by its behavior. In keeping with their namesake, a pair of birds will sing their preferred duets (these vary by location and a bird may switch songs during the year). Much like the early monks who sang antiphonally, the male may start a song and the female answer it. Because of their song varieties, and the nearness of sound to other birds, the best way to recognize whether a cardinal is in the vicinity is by its one

Recognition: 7 1/2 —8 1/2 inches long. Male: An all-red bird with a pointed crest, and a black patch at the base of its thick triangular red bill. Female: Buff-brown, with some red on the wings and tail. The crest, dark face and thick red bill are distinctive.

Nesting: The nest is a deep cup of stems, fine twigs, and bark strips, 2-12 feet above ground in dense thicket or tangle of vines. Two to five eggs, buff or pale greenish, speckled with brownish-red. Incubation about 13 days, by female. Young leave nest about 11 days after hatching. Up to 4 broods per season.

Similar Species: The male Summer Tanager, the other all-red bird of the southern and central states, has no crest.

Now that you’ve read this article, test your knowledge with our Cardinal Crossword Puzzle.