Wildlife Encounters on the Bluebird Trail

One of the many joys of nature is never knowing what discoveries you’ll make. As a bluebird monitor for the Bug Strip Trail at the Blue Ridge Center for Environmental Stewardship, I walk the same path each week but rarely observe the same things. One beautiful day in May, I was treated to the comical sight of a Wild Turkey (Meleagris gallopavo) flying from the field to a tree branch, which loudly protested under the additional weight. Thankfully, turkey sightings are more common now that populations have rebounded since being overhunted a century ago. 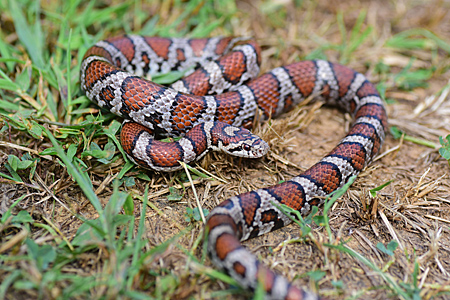 On a bright June day, I was daydreaming of bluebird nestlings in the next box and nearly stepped on an Eastern Milk Snake (Lampropeltis triangulum) soaking in the sun. After my heart started beating again, I took a closer look at this copperhead look-alike. Milk snakes are harmless and have square-like blotches along their body, bordered by black. The blotches differ from the hourglass shape of the poisonous Eastern Copperhead (Agkistrodon contortrix)  and do not extend onto the sides of the body as they do on a copperhead. The milk snake observed me for a minute, then casually slithered away into the taller grass.

The heat of July monitoring brings out butterflies and dragonflies that flutter ahead of you along the trail. A flash of black and white caught my eye, and I watched the low, erratic flight of a Zebra Swallowtail (Protographium marcellus) cross my path. Their bold colors and flight pattern make it difficult for predators to follow and capture them. Pawpaws (Asimina triloba), this butterfly’s larval host plant, and other deciduous trees are found along the edge of the farm field, creating a strip that attracts plenty of insects and is beneficial to both farmers and wildlife (hence the trail name, Bug Strip). 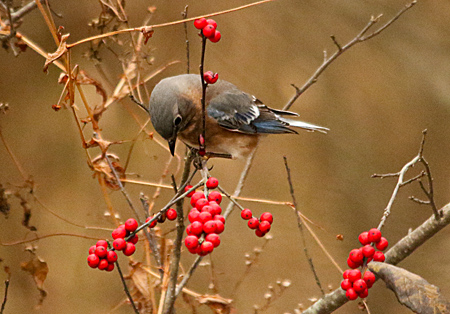 As August rolls in and the final nestlings of the season venture away from their nests, I look forward to the dazzling yellow of the goldenrods (Solidago spp.). This insect-pollinated beauty is sometimes blamed for our runny noses and itchy eyes, when in fact ragweed is the culprit. Ragweed’s inconspicuous green flower heads allow this wind-pollinated native to go unnoticed.

As cold begins to set in this winter, I’ll find comfort in memories of my warmer-weather wildlife encounters all along the bluebird trail.

The Blue Ridge Center for Environmental Stewardship has two bluebird trails (25 boxes), 10 miles of hiking trails, and a Nature Play Area. Almost 650 species have been documented at this future Virginia State Park. The park is currently free and open daily from dawn to dusk, so stop on by!