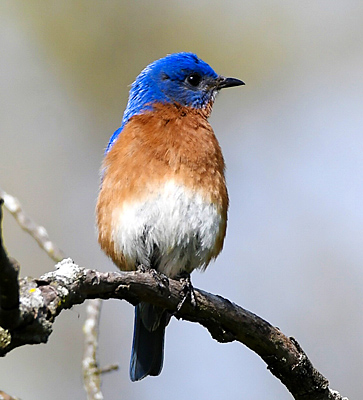 Bluebirds breed throughout the county and are year-round residents, delighting observers with their brilliant royal blue on the back and head, flying acrobatically, and then abruptly dropping to the ground to catch insects.

In Loudoun, Eastern Bluebirds (Sialia sialis) mostly live in open country around trees. Nearly 75% of Loudoun Wildlife’s nest boxes are located in meadows, pastures, parks, lawns, or golf courses. The birds will nest in cavities such as old woodpecker holes in pine or oak trees if these are available. But as woodlands give way to residential and commercial developments and their natural habitat diminishes, bluebirds will readily build their nests in artificial refuges such as nest boxes. 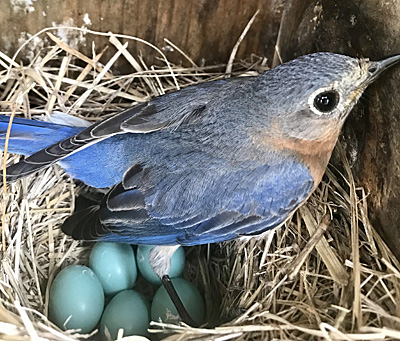 A female bluebird watches over her eggs inside a nest box.
Photo by Cindy Lambert

In March, male bluebirds attract females by bringing pieces of dried grass to a nest box, hopping in and out, and waving their wings while they perch above the box. Once the female enters the nest box with the male, the pair bond is typically established. The female builds the nest with more grass, pine needles, and occasionally horsehair. She lays two to seven pale blue eggs, one each day. The female alone then incubates the eggs for 11 to 19 days.

After the eggs hatch, the male and female both catch insects and feed the nestlings, which take 17 to 21 days to develop and fledge. The first brood usually fledges in May, with a second and sometimes third brood following in the summer. The parents may use the same box for multiple broods. In Loudoun, the last fledglings leave the nest by mid-August to early September. Bluebirds do not migrate to warmer places in the winter and can sometimes be found seeking shelter on colder days in nest boxes, huddled with half a dozen other bluebirds to stay warm.

Bluebirds are not the only species that use nest boxes. Tree Swallows, Carolina Chickadees, House Wrens, Tufted Titmice, and House Sparrows all breed in nest boxes and will vigorously compete for space. Avian nest box takeovers are not uncommon. House Wrens may enter boxes where bluebirds have built their nests, destroy eggs and hatchlings, and then build their nests on top of the bluebird nests. All but one of these species are protected under the federal Migratory Bird Treaty Act (MBTA), so Loudoun Wildlife trail monitors must often let nature run its course. 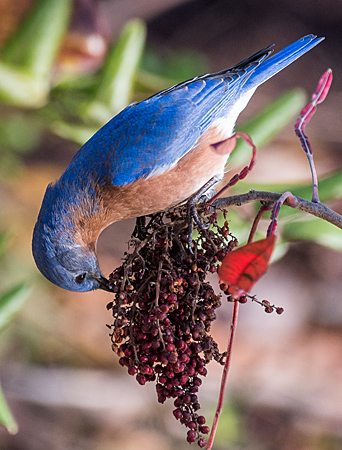 A bluebird forages for a snack on a woodland shrub.
Photo by Larry Tipton

The exceptions to that rule are the House Sparrows. These non-native, human-introduced birds will evict other nest box species, kill adult birds and nestlings, and destroy eggs. Loudoun Wildlife nest box monitors perform a vital service for other cavity nesters by removing House Sparrow nests and eggs before they hatch. Many bluebird trail leaders this year reported increased House Sparrow activity; one reported 22 House Sparrow attacks on nests, resulting in the loss of 23 nestlings. This trail leader removed 43 House Sparrow eggs from the 10 boxes on her trail.

Loudoun Wildlife Conservancy monitors nest boxes each April through August. We welcome new and returning monitors every spring. In 2022 Kiley Gannaway, the Bluebird Program’s education and training leader, delivered an online “get acquainted with bluebirds and monitoring” session to an audience of 45 potential new monitors. That talk was recorded and saved on the Loudoun Wildlife website in the Resources section.

In March, Kiley and Rich Wailes, the bluebird monitoring data coordinator for Loudoun County, led a hands-on training session for new and returning monitors and trail leaders using nest boxes at Ida Lee Park. Throughout the breeding season Lisa McKew, a former Loudoun County coordinator, acted as our help desk/answer specialist, providing guidance to monitors who asked questions about what to do in some unusual situations. Monitors this year ranged in ages from under 10 years old (working with mom and dad) to over 80. Some monitors were experiencing their first season on a trail; another was enjoying her 25th.

If you are interested in becoming a monitor, we would love to welcome you. Please fill out the volunteer application and waiver forms on the Loudoun Wildlife website or email Volunteer Coordinator Kim Strader at kstrader@loudounwildlife.org.