How many senses do you have?

Aristotle’s answer to that question was five — taste, touch, smell, sight, and hearing — but that was about 2,400 years ago. If you were to ask modern neuroscientists the same question, you would get different answers. Their response might be a number between 12 and 20, or maybe just a wry smile and a shrug of the shoulders. 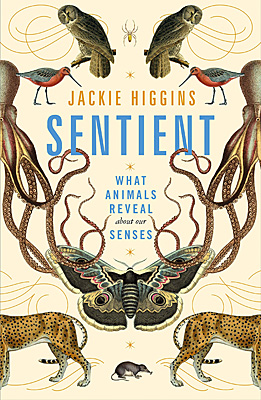 Sentient by Jackie Higgins is a fascinating exploration of all of our senses, even if we disagree about how many we have, and how sensory information is processed by our brain. For each sense, Higgins compares another animal species which has evolved that same sense to a degree far beyond our human abilities. This comparison helps illuminate how our own senses work, and the boundaries and limitations of our senses. There are people who lack a sense, and others who are hypersensitive, and their experiences cast more light on our abilities.

Three hallmarks determine whether a physical response qualifies as a sense: a receiver that can detect some stimulus and send a signal to the brain, a neural pathway for that signal to travel, and a specific location in the brain that can accept and interpret that signal. Using that definition, it is clear that Aristotle seriously undercounted our senses.

Several of the five are in fact multiples. Touch, for example, is really two different senses. Our fingertips contain thousands of touch fibers that send rapid-fire messages to our brain, allowing us to actively explore our environment with our hands. The rest of our skin contains different, more passive receptors that send slower messages down a parallel pathway to a different part of the brain, allowing us to feel both pleasure and pain.

Sight is even more complex, comprising two or three senses depending on your point of view. On our retinas we have millions of cones, which work in brighter light levels and are capable of sending signals that our brain can interpret as to both shape and color. We also have 20 times as many rods which cannot distinguish colors but allow us to see shapes in very low light levels, giving us night vision. A recently discovered third photoreceptor, known as the photosensitive retinal ganglion cell, or pRGC, sends signals to a different part of the brain that controls our circadian rhythms, giving us a sense of time.

Aristotle missed other functions altogether that are now clearly regarded as senses. For example, the semicircular canals in our inner ears are filled with fluid and act like a carpenter’s level, giving us our sense of balance.

The existence of other senses is more controversial. Long-distance migrating birds like the Bar-tailed Godwit appear to have an innate sense of direction allowing them to fly for days in a straight line over open water. Scientists generally agree that birds must have some photoreceptor that allows them to orient to the earth’s magnetic field, although the mechanics of this sense are in dispute. Whether humans have that ability, even vestigially, is unclear.

Another contentious sense is the ability to perform acts like closing your eyes and touching a finger to your nose. The ability to do that does not implicate any of the other senses (except touch at the very end), so it suggests there might be another sense at work, which scientists tentatively call a sense of bodily awareness.

Sentient is an eye-opening, jaw-dropping, mind-expanding tour of our senses, and a great read. Most of all, it makes perfect sense.