Intermittent rain showers on the afternoon of May 1 could not dampen the enthusiasm of the nine volunteers who conducted a benthic macroinvertebrate survey and measured the sodium chloride level of Broad Run in the Aldie community of Willowsford.  They determined that the stream met acceptable ecological conditions, and the salt level was also acceptable at a reading of less than 30 parts per million. 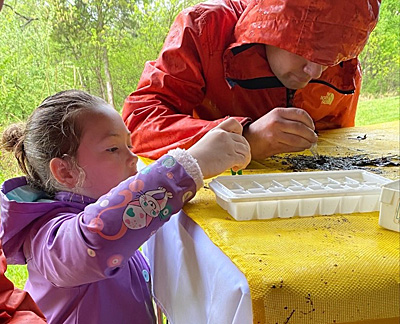 Certified monitor Rich Wailes guided participants, including Lightridge High School Earth and Environmental Science teacher Jenny Wolfe, and three student members of the Environmental Science Club.  Jenny’s elementary school-aged daughter started the activity by collecting stream water, inserting a salt watch test strip, and reading the result about 10 minutes later.  This was the first time she had done this, and pronounced it very easy to do.

The high school students made the first of three dips in the stream, following the Virginia Save Our Streams (VASOS) biological monitoring rocky stream bottom protocol.  After noting their observations about the stream’s water temperature, width, depth, flow rate, algae type and quantity, amount of shade and riffle composition, they chose a riffle, dropped their seine net, and used a combination of rock scrubbing and substrate scraping to collect macroinvertebrates.

They netted 65 organisms, including a fish and a crayfish.  Two more dips were taken to get the total number of organisms above 200, which is the minimum that VASOS and the Virginia Department of Environmental Quality require for a statistically significant sample.  Then they sorted, identified  and tallied their total of 261 collected macros to get a stream health score.

This stream was last monitored on October 1, 2021.  It scored 8 out of 12 then, indicating that ecological conditions could not be determined.  This time it scored a 10, meaning acceptable ecological conditions. Almost half of the macros collected were beetles – a good indicator of acceptable water quality – while the fish, crayfish and a frog (not part of the sample) were all closely observed as well.