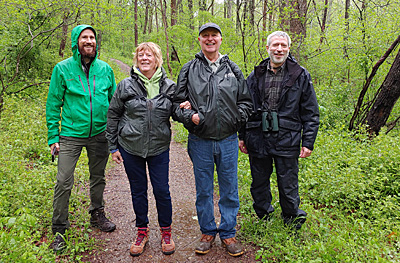 Our luck turned for the worse when we saw the forecast for the weekend of May 7-8.  Indeed, on Saturday we were challenged with over an inch of rain, wind and about 40 degree temperatures.  The trails were literally rushing streams that we had to walk through.  Everyone had soaked feet and pants by the end of the day.  It was miserable!  And yet, despite these less than ideal birding conditions, we saw over 80 species on the first day!  The highlight species on the first day was a flock of bobolinks in a field near Piney Swamp.  This is a bird that has been in sharp decline over the past few years, due to habitat loss.

On day two, Sunday, we had slightly better weather.  Still cold, but dry, we headed to Algonkian Park in east Loudoun, where we picked up a bunch more species, including a very beautiful Barrred Owl who posed for us all morning.  But the day was marked by massive flooding; the Potomac was a torrential rapids, carrying whole trees down it like balsa rafts.  We even saw a Walnut tree that was at least 100 years old (with a base diameter of six feet) fall on the trail in front of us.  Regardless, we persevered and by the end of the afternoon, we had picked up 104 species, exceeding our expectations.

You can view the trip report on eBird at https://ebird.org/tripreport/36845 for a complete list of species seen.  Although it was a grueling weekend, with over 20 miles of walking, the group had an enormous amount of fun!