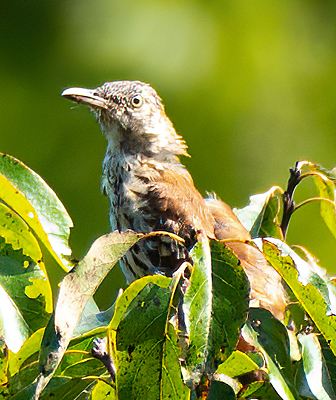 In spite of the heat and high humidity 22 people, including a group from the Frederick County  Bird Club (MD), showed up for Loudoun Wildlife’s regular monthly bird walk at the Blue Ridge Center for Environmental Stewardship on August 28. Thankfully the trails in the woods kept the temperatures in the mid-70s. Temperatures soared in the open field areas.

Led by Michael Sciortino and Joe Coleman, we split into two groups, one of which took the Farmstead Loop and the Piney Run Spur, and the other crossing Piney Run and walking Arnold and the Little Turtle Trail. Both groups observed several Yellow-billed Cuckoos, Ruby-throated Hummingbirds, and a lingering Green Heron at the vernal pool/old farm pond where there has been a family all summer long. We also observed a few warblers including a Chestnut-sided, two Black-and-white, and a variety of Common Yellowthroats (males, females, and juveniles). A lone Brown Trasher was active in the Demory Field area. While tallying at the end of the walks we added a Bald Eagle, a Cooper’s Hawk, and several vultures for a total of 42 species for one of the groups and 44 for the other group. 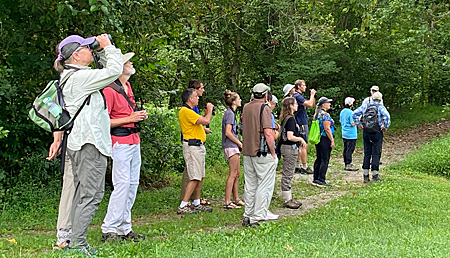