Sixteen dragonfly enthusiasts visited the wonder that is Bles Park on June 13. With its unique mix of aquatic habitats (a pond, a marsh, a creek and a river) not found anywhere else in Loudoun County, it provides an ideal setting for a dragonfly walk. Dragonflies and damselflies species vary based upon the aquatic habitat their nymphs develop in and many species are habitat specialists. 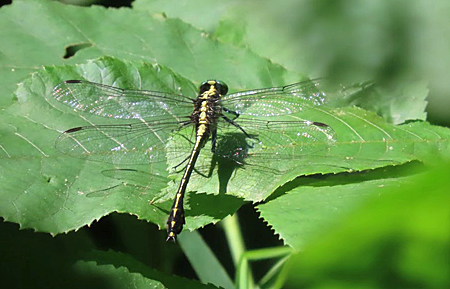 As we started the walk, lead by Bryan Henson and Larry Meade, we almost immediately found one of the most common dragonflies in our area — the Eastern Pondhawk. We saw variations across the male, female and developing adolescents. A few more steps down the path led to another common dragonfly — the Blue Dasher. As we approached the marsh, we started to find more dragonflies including Common Whitetails and Widow Skimmers. Two species in the pond damsel family were found along the path bordering the marsh: Blue-tipped and Blue-fronted Dancers. A Black Saddlebags teased us by flying overhead and a couple of Slaty Skimmers landed nearby, but didn’t pose for pictures.

Near the confluence of the creek and the river, we found our only sighting of a member of the Clubtail family of dragonflies — the Black-shouldered Spinylegs. Along the edge of the Potomac River, we found one of our tiniest damselflies, a Fragile Forktail.

As we returned back to the parking lot, we stopped in a small extension of the marsh that often hosts Great Blue Skimmers. In addition to the expected Great Blue Skimmer, sharp eyes picked up an uncommon species of damselfly in the spreadwing damsels family — a Slender Spreadwing!

All told, we found 13 species of dragonflies and damselflies during our walk. While we got good looks at some species and enjoyed ourselves, the species diversity was down from previous years. We postulate that cloudiness and elevated water levels (hiding some emergent vegetation) contributed to the lower species count.