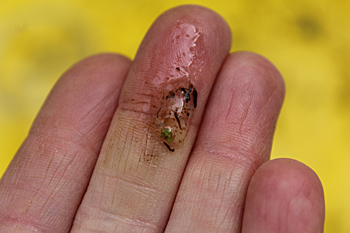 Although no snails turned up in the net, the team did discover some snail eggs! Photo by Amy Ulland.

Shortly after becoming certified stream monitors in 2019, Loudoun Wildlife Stream Team members Amy Ulland and Emma Lloyd established their stream site on the property of Amy’s parents and Emma’s grandparents, on the North Fork of the Catoctin. The stream received an initial score of 9 out of 12, just reaching the acceptable ecological conditions category.

This year, Stream Team volunteer Susan Schuler joined Amy and Emma to help collect, identify, and tally the benthic macroinvertebrates hiding in one of the stream riffles. A riffle is a shallower and faster moving segment of stream that contains higher levels of dissolved oxygen, which the macros need to survive.

The team collected a total of 292 macros from a 60-second sample, including Water Pennies, Riffle Beetles, Caddisflies, Mayflies, Stoneflies and Midges. Although they didn’t collect any snails, they did find some snail eggs in the net! The wide variety of macros and the high numbers of pollution sensitive species like Riffle Beetles, Mayflies, and Caddisflies resulted in an incredibly healthy rating of 12 out of 12. Although there is a cattle pasture directly upstream from the site, the landowner installed exclusion fencing to keep them out of the stream – probably contributing to the health of the stream. 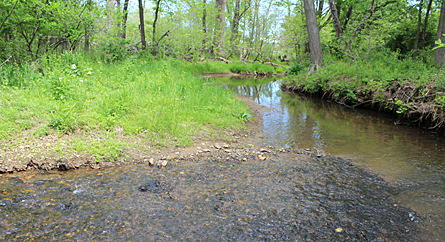 The riffle at the survey site on the North Fork of the Catoctin. Photo by Amy Ulland. 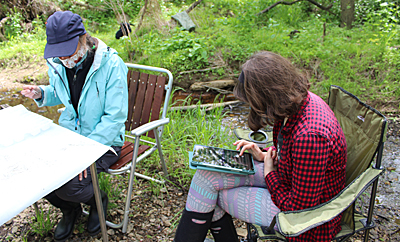