Phil Daley, Certified Monitor and Regional Trainer, has monitored the Crooked Run stream site since 2008. While the site is located just outside of Lincoln, Crooked Run itself continues to flow south until it empties into the North Fork of the Goose Creek. Over the years the site generally received scores from 9 to 12 out of 12, indicating acceptable ecological conditions.

On May 12, Phil led some of his usual volunteers – including Hope and Rowan Hanes and Paul Miller – out to the site. Greeted by a pair of sandpipers, the team set up their equipment and got to work. After collecting sodium chloride and water temperature readings, Paul and Rowan set up the net at the site’s riffle and used standard Virginia Save our Streams protocol to collect a 90-second sample.

The sample consisted of mostly Mayflies, Water Pennies, and Riffle Beetles – all of which are highly sensitive to pollution. The team discovered one unusual macro called a Dancer Fly, which is a kind of true fly and gets its name from the swarming behavior of the adults of some species.

The site scored a very healthy rating of 11 out of 12, although the team recognized that winter salt treatments of the bridge upstream could contribute to future threats to the stream’s health. Leaving the site, the team also noticed a school of American Toad tadpoles (or toadpoles) in a shallow and still section of the creek. 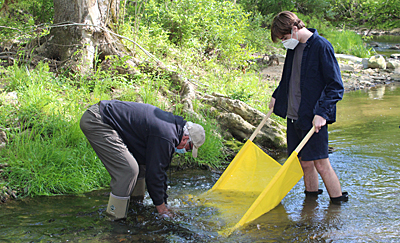 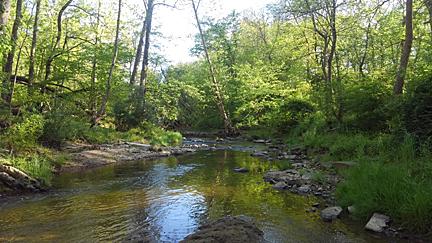 A view of Crooked Run downstream from the riffle. Photo by Amy Ulland. 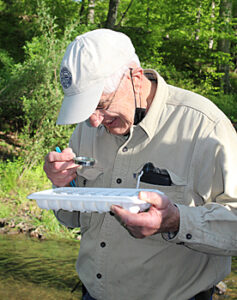 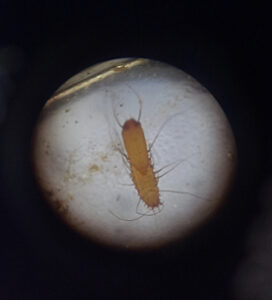 An up close look at the unusual Dance Fly collected at Crooked Run. Photo by Amy Ulland.