Gone Pishing (Allison Gallo, Bryan Henson and Jane Yocom) started at one of the loveliest parks in Loudoun County, the Blue Ridge Center for Environmental Stewardship (BRCES).  On the far northwestern side of the county, the tranquil country feel of the park contrasts dramatically from the hustle and bustle (cars, airplanes, boaters, etc.) surrounding some of the more eastern part of the park. 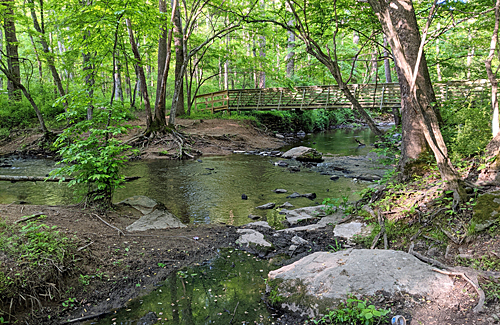 It’s also home to a spectacular array of birds during migration and hosts some wonderful summer breeders.  Some of the special birds that breed in this park include Blue-winged Warbler, Cerulean Warbler, Kentucky Warbler, Yellow-breasted Chat and Yellow-throated Vireo; every one of those birds is a stunner!  We missed some of those, but we did find 59 species of birds.  Below is a picture of Jane and Allison looking up into the trees — what a beautiful place.  Let us know if you’d like to go, and we’ll be happy to show you around.  It can be very productive in the summer for butterflies and dragonflies too! 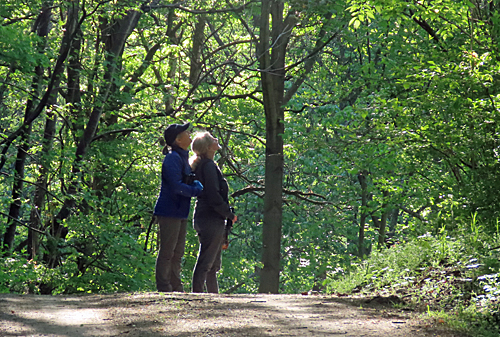 Allison and Jane looking for a bird at BRCES near the pond.
Photo by Bryan Henson

Next, we stopped at two Purcellville schools, Mountain View Elementary and Woodgrove High School, which have mature forest, fields and wetlands surrounding the schools, and we were able to hear and see Willow Flycatchers, Eastern Meadowlarks, Purple Martins and Red-headed Woodpeckers.  At another local pond, we found a Baltimore Oriole singing and had an unexpected fly over by a Broad-winged Hawk.

The next stop was for lunch and a little feeder watching.  We stopped at Jane’s house hoping to find a Purple Finch.  Alas, we did not see Purple Finches, but we picked up an even more surprising find of Pine Siskins. (Winter 2020-2021 was an irruptive year for finches and they came into our area in far greater numbers than normal.) 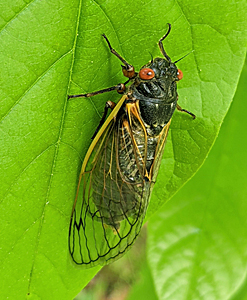 After refueling, we decided to take it easy with some mostly stationary and/or car birding.  We stopped by a good spot for Bobolinks, but sadly the Bobolinks were a no show.  Then we drove to a bridge at the edge of Loudoun County to look for Cliff Swallows at a known nesting location, and happily, the Cliff Swallows made an appearance.  Next we stopped at a pond in southeastern Loudoun, Middlesex Dr. Pond. Here, with the assistance of a couple of our birder friends Ed and David, we spotted a rare for our area Common Gallinule who played hide and seek with us for a while before finally letting us get a look at him.  It’s nice to have friends with patience and keen eyesight when you’re looking for a sneaky bird.  We also located some more expected shorebirds: Least Sandpiper and Lesser Yellowlegs.

Our final stop for day one was Algonkian Park.  For the previous few nights, we had seen Common Nighthawks flying here around dusk.  This night was no different.  Common Nighthawks are amazing flyers that hunt insects and are rarely seen to land.

Brood X Cicadas were just starting to emerge during our birdathon. We do a lot of our birding by ear, and we were glad the cicadas had not yet begun singing as it would have made ear birding much more difficult.

With day one in the books, we were tired, but thought we had done pretty well with a little under a 100 species.  We had high hopes for the next morning.

The next morning, we started the day by frantically rushing around Algonkian Park.  Why frantically?  Because at 8am, we were leading a bird walk at nearby Bles Park, and mornings are often the most productive birding hours of the day.  While driving into the park, we heard crows going nuts, which is a good sign of an owl. For the last couple years Algonkian Park has been a good breeding location for Great Horned Owls.  Any day you see an owl is a good day! 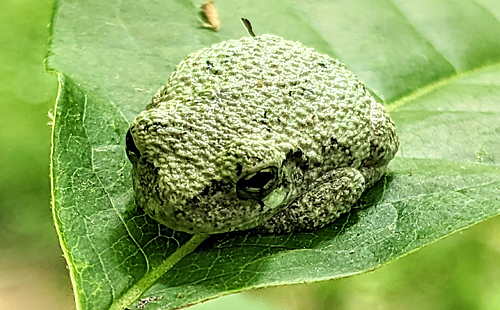 We then took a quick mile and a half hike along the Potomac. This proved fruitful because we found both Blue Grosbeak and Rose-breasted Grosbeaks.  We also found a Bay-breasted Warbler, Black-and-white Warbler and Magnolia Warbler.  Time to head to Bles!

Since the birds at Algonkian were very active, we were hopeful that Bles Park would be active too.  Unfortunately, Bles Park was much quieter than we were expecting. and we missed a few species we hoped for, but we did find a lovely Prothonotary Warbler singing in the open for all of our walk participants.  After the walk, we ventured about the park trying to pick up some of the birds we missed, but we really only added Blue-winged Teal to our list.

We made a quick stop at Horsepen Run Trail, a private nature preserve owned by our HOA, that yielded our target species, a singing Prairie Warbler.

Then we went back to Algonkian hoping to find some more warblers, but it was pretty quiet since birds tend to stop singing later in the morning.  Suddenly, we heard a singing Swainson’s Thrush.  After we found the thrush, we then found several more warblers making us feel much better about our list.

A couple more stops wrapped up our birdathon by adding a few more species.  In the end, we found 120 species of birds over the course of two days.  So, all in all, a great birdathon. 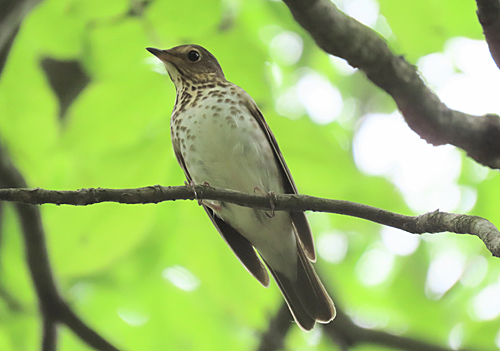