Fully-palmated Birders Logged Many Miles and 115 Species of Birds

The Fully-palmated Birders began our spring 2021 birdathon activities bright and early on Saturday, May 15. The team is comprised of Christine Boeckel and the four Mikes: Michael Myers, Michael Sciortino, Mike Mercincavage and Mike Scott. We started promptly at 6:00 a.m. at the Algonkian Park boat ramp and began our odyssey. Thankfully the team had plenty of gas in our vehicles, and we were not affected by the temporary gas shortage that plagued the area for the few days before. 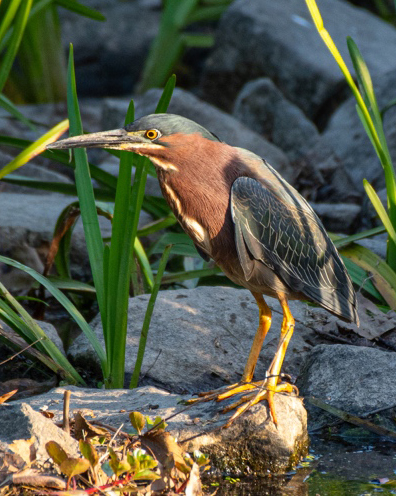 Overall we clocked in at 115 species after visiting 12 different locations throughout the county with numerous visits to Algonkian Park. The team also logged close to 20 miles of hiking over the two days with a six-hour hike at the Blue Ridge Center for Environmental Stewardship (BRCES) that was quite fruitful.

The Algonkian boat ramp offered a great start to our species list with 58 species recorded. The highlight was a family of Red-breasted Mergansers on the foggy Potomac. This was a first of the year for many of the team members. While there wasn’t anything truly spectacular recorded at this location, we did set a good foundation of species to build upon. We did see a Savannah Sparrow early on, Baltimore and Orchard Orioles, and a smattering of warblers during the three hours at the boat ramp area. The team was a bit disappointed with the lack of warblers, but we were optimistic as the day was still young.

We moved on to the Algonkian water park area and were excited at the prospect of seeing more warblers. We were quickly engrossed in sightings of three Common Nighthawks at 9:30 in the morning in the parking lot as we were getting ready. The morning light provided us with great opportunities for pictures. The warbler activity started to heat up, and we had excellent looks at a Prothonotary Warbler that posed for pictures as well as views of Scarlet Tanagers in the woods. Still, the warbler activity was underwhelming, but we did see and hear a Magnolia Warbler, a couple of Blackpoll Warblers, Northern Parulas and Yellow-rumps.

To wrap up the Sterling area, we stopped at Bles Park for a peek at the pond for shore and wading birds. The pond was quiet except for numerous families of Wood Ducks. We estimated the numbers of individuals at 35 total. We did get a quick glimpse of a Common Gallinue that was scared into the reeds and virtually disappeared. The highlight was hearing the Marsh Wren that had been reported in the days prior to our visit. Still, we did not hit the motherload of warblers but did add an Ovenbird and a Hooded Warbler, which was a lifer for some of the team members. After a quick lunch provided by Chrissy and her husband, Eric, we headed down the Loudoun County Parkway corridor towards the South Riding area.

A family of Wood Ducks.
Photo by Michael Sciortino

On the way south, we made quick stops at the Broadlands Wetlands Nature Preserve and the Haverford Square Fields and spent a few hours at the Broad Run Valley Stream Park. The latter was fairly birdy and we captured 53 different species over a three-hour period. The highlights were a family of Hooded Mergansers, our first Rose Breasted Grosbeak, a few Grasshopper Sparrows and the always reliable Horned Lark at Haverford Square. 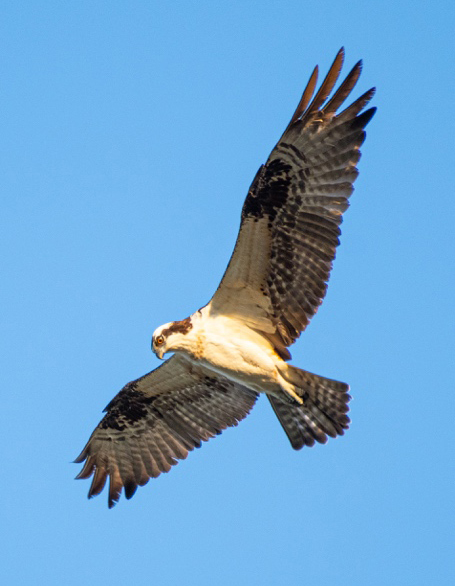 Middlesex Lane Pond provided another look at a Common Gallinule of the far side of the pond working its way through the reeds. This was our second for the day. The shorebirds were active as usual at the pond and we recorded Least, Solitary and Spotted Sandpipers as well as Greater and Lesser Yellowlegs. Green Herons and Great Blue Herons, and a Great Egret hunted while the sun started to set. The team was lamenting the lack of an Osprey sighting during the day only to be rewarded with a close encounter with a curious one as it flew direct over our head at dusk. Warbler activity at the pond was nonexistent so we would have to rely on our Sunday locations to get the numbers up.

The team capped off the day back at the Algonkian boat ramp where we dropped off our cars earlier in the morning. There was quite a bit of activity as park goers wrapped up their events for the day. Through the din of activity and as we ate our dinner, we finally heard our last unique species of the day, a lone Warbling Vireo in the tree next to the ramp. It was a lifer for a couple of our team members. It was a good day.

Our second day started at BRCES at 6:00 a.m. sharp after we car-pooled from the Leesburg area. It was interesting to see the property this early in the morning, and it surely delivered for the team as the warblers were active. We were excited to hear and see a second Prothonotary Warbler of our weekend while at the pond area. That was a good omen, and as we made our way toward Piney Run, other warblers were active. We spent quite some time tracking three Cerulean Warblers high in the tree canopy as well as 13 more warbler species along the Sweet Run Loop trail. Those species included four Louisiana Waterthrushes, a Kentucky Warbler and Magnolia Warbler as well as others. The team spent over seven hours at BRCES, covered seven miles and recorded 67 species. We were quite tired, but happy.

After a quick trip to Ash George Lane near Lovettsville for possible Bobolinks (no luck), we were off to the Dulles Wetlands for more excitement. We recorded 33 species over an hour and a half with the highlights being our first Bald Eagle of the weekend. We were a bit worried about our waning chances of seeing an eagle and were equally worried about the rain on the horizon, but the weather held out and the wetlands delivered. We picked up our first Prairie Warbler and had good looks at a Yellow-breasted Chat. Interestingly, we also ran across a lone female Muscovy Duck resting quietly on the edge of the pond. This sighting was the first for most of the team, and certainly a unique one for Loudoun County. 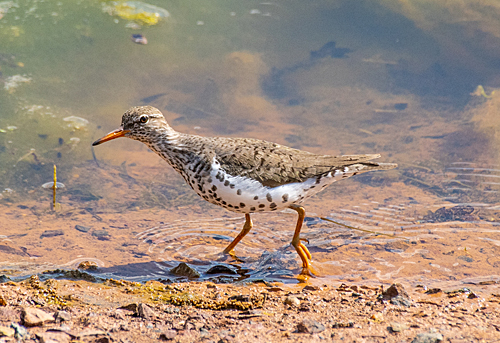 As our Sunday was winding down, we closed out our event at Morven Park for potential views of a Red-headed Woodpecker or a Hairy Woodpecker, only to record Red-Bellied, Downy, Pileated, and a Northern Flicker. That was a good chunk of the woodpecker list but not the ones we needed. We did add House Sparrows and House Finches that seemed to elude us all weekend long. We recorded a respectable 38 species in 37 minutes, but these were mostly duplicate observations from other locations.

All the driving and hiking was well worth the 115 species that we recorded over the weekend, and it was a pleasure to raise money and awareness for Loudoun Wildlife during this worthwhile event.