On February 15, eight participants joined trip leads Bryan Henson and  Michael Sciortino at Middlesex Drive Pond to begin the trip. They immediately caught sight of the Mute Swan that inhabits the lake. Then the team found American Black Ducks, Gadwall, and a block of Ring-billed Gulls. On the mud in the middle, we found Wilson’s Snipe and Killdeer. At a distance, we were able to find and identify the Eurasian subspecies of the Green-winged Teal, probably one of the rarest ducks to be found in Loudoun County. 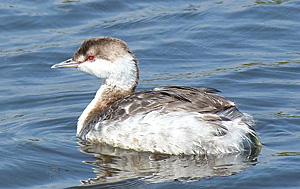 The next stop was Ashburn Lake where we stood on the overlook. The group found some Common Mergansers and then spotted some Canvasbacks. A small flock of Ruddy Ducks were spied to our left with their tails sticking up like they do. Sharp eyes found a Pied-billed Grebe and a flyover Cooper’s Hawk. We then drove across the street to Alder Lake and took in the beauty of Buffleheads. Mallards snuck around the edges of Alder Lake also.

We drove to the backside of Ashburn Lake, but didn’t really find anything new in terms of waterfowl, but we did see a Bald Eagle and two Red-shouldered Hawks!

Our final stop of the day at Beaverdam Reservoir wasn’t really ducky, but we did see some more Common Mergansers, Ring-billed Gulls, and Canada Geese. The highlights were a couple of Herring Gulls mixed in with the Ring-billed Gulls and two sneaky Horned Grebes that eventually let everyone look at them.