Even in Winter, There is Much to Explore at the Blue Ridge Center

Four hardy souls met up with leaders Phil Daley and Paul Miller for a walk in the snow on February 14 at the Blue Ridge Center for Environmental Stewardship (BRCES). The overcast sky, cool breeze and low temperature meant that we couldn’t linger as long as usual near the starting point of the walk. (Unfortunately some late arrivals never caught up with the group). 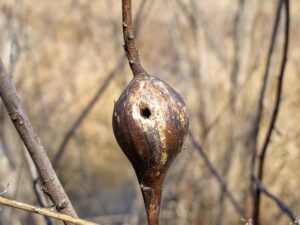 The trails were relatively clear with snow about five inches deep. As we started towards Wortman pond, we spotted an Opossum ambling along behind the Spring House towards the pond, and then returning towards the wooded area. Passing by the pond we noted a pair of Canada Geese while we discussed the importance of the pond to Spotted and Jefferson Salamanders who use it for mating/propagation in lieu of a true vernal pool. Along our route we ventured through the meadow near the scout camping area, stopping to discuss the variety of invasive and natural shrubs, trees and vines. Fortunately we found three varieties Goldenrod Galls and a Praying Mantis egg mass that had been partially picked apart by some hungry bird.

All along the walk we saw and heard numerous birds, including Crows, Raven, Red-shouldered Hawk, Cardinals, Juncos, White-throated Sparrow, Song Sparrows, Pileated and Downy Woodpeckers and Northern Flickers.  As we proceeded along Farmstead Loop and past several old homesteads, we passed several groups coming in the opposite direction and stopped to chat and exchange information regarding other BRCES hiking trails.

We were very happy to see many Skunk Cabbage flower heads poking up through the snow in the seepage along the trail. Further along the walk and up the hill past the old log house, the group noted and discussed a variety of trees and lichens. Once back out of the woods, a beautiful male Bluebird made his presence known by song and display for each of us to see. As we approached the parking area, we spotted a hawk on a far off tree. When he took to the air and came directly over us, we saw a fine Coopers Hawk — a nice way to end our day.