It was a beautiful morning for Loudoun Wildlife Conservancy to visit the private (restricted access) Dulles Greenway Wetlands Mitigation Project on Wednesday, March 10th. While the temperature started out in the mid- 30s it was close to 60 when the walk, led by Mary Ann Good, Mike Scott and Carol Sottili, wrapped up a few hours later.

Although we did not see large numbers of ducks, we did see several species with the highlight being a female Lesser Scaup that was swimming with the Ring-necked Ducks.

Tree Swallows, chirping high above as they darted here and there, and an Eastern Phoebe were First-of-Season birds for most of us. Another sign of spring was two Belted Kingfishers copulating on a branch hanging over the Goose Creek. Our sightings also included several species who winter here but will be moving on soon: a Yellow-bellied Sapsucker, a Golden-crowned Kinglet, two Brown Creepers, a Fox Sparrow, a couple of Swamp Sparrows and several Yellow-rumped Warblers.

A fair number of raptors were also seen including a Bald Eagle perched near its now enormous nest. At one point, while watching a soaring raptor, the beautiful yellow chest of an Eastern Meadowlark glinting in the sun caught our attention. In addition to three Bald eagles, we saw some very vocal Red-shouldered Hawks and a Red-tailed Hawk. A Northern Harrier flying over Little Oatlands’ fields was the last bird we saw before leaving the Wetlands.

A chorus of Spring Peepers accompanied us the entire walk, and at point, a number of quacking Wood Frogs joined in.

For a complete list of the birds see the list below or view on eBird at https://ebird.org/checklist/S83130728.

Although Loudoun Wildlife Conservancy doesn’t hold regular walks at  Dulles Greenway Wetlands, we do plan to hold several there in the next couple months – keep an eye on the events calendar for the walks. 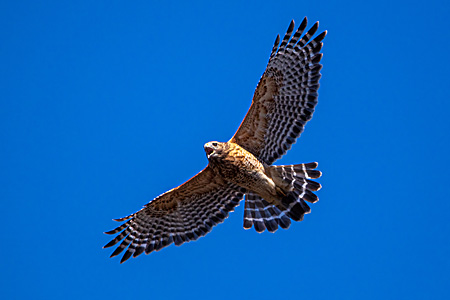