When I started writing book reviews for the Habitat Herald a couple of years ago, Jennifer Ackerman’s The Genius of Birds had already been out for a few years, so I didn’t get a chance to review it, although it was my go-to recommendation for the best book about birds I’ve ever read. Until now. I’m happy to report that there is a new favorite in town and Ackerman stays on top. Her latest book, The Bird Way, has taken over the number one spot on my list!

The Genius of Birds focused on the scientific study of the cognitive ability of birds in such areas as problem solving, creating and using tools, communication, memory, and aesthetic creativity. In The Bird Way, Ackerman casts a wider net, looking at, as the subtitle says, “how birds talk, work, play, parent, and think.” 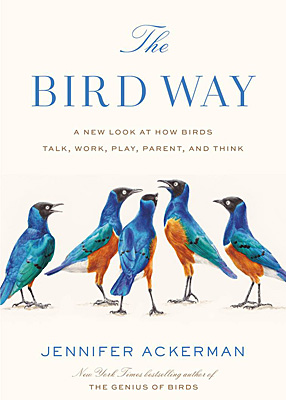 This takes Ackerman around the world, from Australia, where songbirds are believed to have first evolved, to Central and South America, where there is spectacular diversity of birds of all shapes and sizes. Indeed, one of the particular joys of this book is going online to find photos of birds with wonderful names like Greater Honeyguide, Rainbow Bee-eater, Satin Bowerbird, White-browed Sparrow-Weaver, and my personal favorite, Superb Fairy Wren.

The research Ackerman covers in The Bird Way is endlessly fascinating. For example, scientists have determined that birds use two major categories of alarm calls: “Mobbing” calls are a call to arms intended to alert other birds nearby that there is a somewhat passive threat they need to attack as a group and drive off. On the other hand (or talon), “flee” calls indicate that there is a predator in flight, a Peregrine Falcon for example, from which all birds nearby need to take cover.

Researchers have confirmed that there is interspecies understanding of these alarm calls. The other birds in the neighborhood all recognize the “chick-a-dee-dee-dee” call of the Carolina or Black-capped Chickadee as a sign of danger and may even understand that the more “dee” notes at the end, the greater the threat. Small mammals like squirrels and chipmunks are known to comprehend and react to bird alarm calls. The reverse is also true, as small birds like chickadees recognize squirrel alarm calls and will take cover when they hear one.

Another interesting investigation of a bird familiar to us is the Common Raven. We tend to think of ravens as Poe described them: “grim, ungainly, ghastly, gaunt and ominous.” Indeed, a flock of ravens is called an “unkindness” or sometimes a “conspiracy.” That reputation is well-earned, as ravens are extremely territorial, ferocious, and as one ornithologist described them, “indiscriminately voracious.”

So it comes as quite a shock to learn that ravens are among the most playful of all birds. They have been observed dropping an object like a twig and then swooping down to catch it in mid-air, and then doing it again, making clear the first time was no accident. A fun group activity is taking turns gliding down a steep riverbank like a waterslide. Another trick is hanging upside down from a branch and passing an object from free foot to beak over and over again. These are often done with an audience of other ravens, who will step in and take over when one of the performers gets tired.

Brown-headed Cowbirds are well-known to birders as nest predators and brood parasites, laying their eggs in the nests of other birds and having no role to play in their upbringing. Ackerman raises an intriguing question about them: If a baby cowbird is raised in the nest of a loving family of kinglets or finches, why doesn’t it imprint on the nurturing behavior of its host parents and give up its predatory and parasitic ways? As Ackerman puts it, “How does a baby Brown-headed Cowbird know it’s a cowbird and not a kinglet?”

For many years this was regarded as purely a question of instinct. However, researchers have recently discovered that female cowbirds will hang around the nest after the chicks have hatched and sing a chatter call which has the apparent effect of hardwiring the baby’s brain to understand that it is a cowbird and not a bird of the host species.

The Bird Way is an extraordinary book, providing lovely descriptions of the behaviors of dozens of birds, and profiles of the researchers and their research, all in a lively and engaging style. It should be required reading by everyone who loves birds. I can think of no better addition to your birding library.