Please Your Bumblebees With P. digitalis

I’m not new to gardening, but I am very new to native gardening. Before moving to Loudoun four years ago, I had filled all my previous gardens with traditional cottage-style choices like foxgloves, hollyhocks, and English roses — all beautiful, all non-native, all somewhat popular with some pollinators but not the healthiest choice for all of them. So when I decided to take the native-plant plunge in my new garden, I began to look for native substitutes for my old favorites. The Penstemon digitalis I planted last year has exceeded my cottage-garden dreams and (more important) pleased an endless supply of bees. 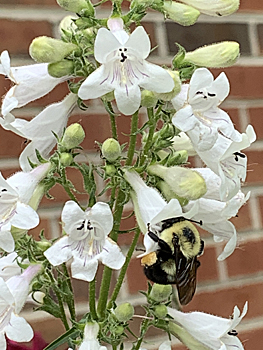 A bumblebee burrows into a Foxglove Beardtongue flower.
Photo by Michele Savage

Also known as Foxglove Beardtongue, this native shares part of its common and scientific names with the non-native foxglove varieties I’ve grown and loved. But the tubular white flowers of this showy native’s 3-foot stalks look more like those of another non-native favorite of mine, snapdragons.

Penstemon digitalis is considered semi-evergreen, but planted in full sun by the southern wall of our house, my plants’ base leaves remained surprisingly green during our mild winter. I’ve read that some gardeners use it as a winter groundcover, but there is so much more to recommend it.

Mine bloomed with abandon from very late May well into June, and bees were its constant companion. P. digitalis is known for its special value to native bees, including Mason, Digger, and Leaf-cutting bees. We saw many Masons and honeybees on ours, but the most prevalent visitors were the bumblebees, who burrowed into one white bloom after another and never seemed to mind how closely we watched.

Penstemon digitalis is also an important nectar source for butterflies, moths, and the Ruby-throated Hummingbird. It is even a caterpillar host for the Buckeye butterfly and eight moth species. No baby Buckeyes here yet, but I’ll keep hoping and checking!

After a brief but busy season of sustaining its insect admirers, my Penstemon digitalis is developing the seeds that will ensure its return in greater numbers next year, I hope. This short-lived perennial can reseed rather freely, I’m told. But I won’t mind if it does, and neither will the bees.